Skip to content
You are here:Home » Grammar » Blond Or Blonde? Why Do We Use These Two Different Words?
Grammar
Updated December 4, 2022 Derek Haines 2023 Views 0 Comments

What’s the difference between blond vs. blonde? Why do we use two different nouns and adjectives for fair hair color?

The word blond is a noun or adjective that is masculine, and blonde is the feminine form.

Using gender-specific grammar and vocabulary in the English language is most unusual today.

But the alternative spellings of a blond man and a blonde woman remain in everyday use.

In This Article Hide
Why are there two words for fair hair?
Blonde or blond?
Blond and blonde for inanimate objects?
The use of gender-neutral nouns
Removing gender in English

Why are there two words for fair hair?

The two different spellings of blond and blonde are because the word is originally French.

A blond man in French is un homme blond.

Many Latin languages have grammatical masculine and feminine forms for all adjectives and nouns, including inanimate objects.

A car (une voiture) in French is feminine, but a book (un livre) is masculine.

The sun (le soleil) is masculine, but the moon (la lune) is feminine.

If you speak English and have learned French or Spanish, you will know how complicated gender forms can be.

But there is no such grammatical gender in modern English.

Although, until around the thirteenth century, Old English used Latin-based gender grammar.

So which one is correct?

Which word should you use for someone with fair hair and blue eyes?

According to the entry in The Guardian- Observer Style Guide, it’s better to use the masculine form, blond. It is because it is seen as being gender-neutral.

… is the adjective, male and female: John has blond hair, and Jane’s hair is also blond.

As nouns, blond is male (John is a blond), and blonde is female (Jane is a blonde), but they sound old-fashioned and sexist nowadays (“Gentlemen Prefer Blondes”), so it’s best to say simply that someone is blond.

The Tameri Guide for Writers takes a similar view.

Blonde refers to a woman, blond refers to a man. Some object to the gender distinction and use “blond” exclusively.

Lexico, which uses the Oxford Dictionary for its references, states this about the two words.

The spellings blonde and blond correspond to the feminine and masculine forms in French. Although the distinction is often retained in Britain, American usage since the 1970s has generally preferred the gender-neutral blond.

The gender-neutral word is more prevalent in American English, so you would mostly use a blond woman or blond women.

But in British English, blonde is still in very common use as an adjective and as a noun referring to women.

It would be rare to see expressions like strawberry blonde or ash blonde used without an E in the UK.

Generally, we only use the feminine form, which refers to women. For a man, we usually say he has brown hair.

Blond and blonde for inanimate objects?

We often use blond for things like furniture—for example, a blond dresser or a blond wooden table.

But commercially, blonde is still popular for brand names and advertising.

If you do a Google image search for beer or coffee, you will find that most products use blonde as an adjective. 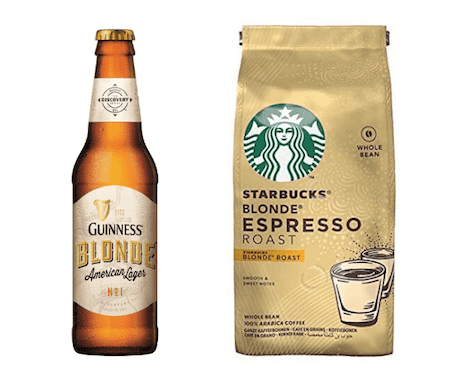 While you would think that blond is the best choice for inanimate objects, people working in marketing must still believe that blonde sells better.

Out of curiosity, I did a quick search for Google keyword frequency and use for the two words. The result was a little surprising.

The first result is for a popular movie, which takes an E. Also, most two-word search terms use blonde and not blond.

But for the one-word form used in Google search, blond has slightly more volume than blonde.

You could probably say from the table above that it is fifty-fifty in use for either word.

The use of gender-neutral nouns

While English no longer uses gender-based grammar, it has a lot of gender-specific vocabulary.

Many of these words have changed to a gender-neutral register in recent decades, particularly in American usage.

You can think here how the feminine word waitress is no longer used. Today, we only use the word waiter.

Most gender nouns for professions have changed to a neutral form in current English usage. Here are some common examples.

However, some words, like the adjective blonde, still have two gender forms.

Some are still commonly used, while others are slowly disappearing.

English is constantly evolving, especially when it comes to adapting to changes in society.

Along with new words, many common words are changing and morphing every year to adjust to equality and diversity.

It is not only with vocabulary either. There is quite a push to change how we use gender-based grammar.

For instance, according to APA Style, it is becoming common to use they as a singular pronoun to replace he and she.

It takes some patience to write in this way. However, with some practice, it is possible to replace he and she and him and her with they, their, and them.

But back to nouns and adjectives and what forms you should use.

Whenever possible, you should use a gender-neutral word. Between blonde and blond, it is better to use blond in most cases.

Most importantly, avoid words that use the now old-fashioned feminine suffix of ess.

Most common words, such as hostess, stewardess, and waitress, dropped the suffix long ago.

The only possible exception that remains is a princess. Maybe this is due to an attachment the world still has to Princess Diana.

But more likely, no matter how hard you try, the word prince simply doesn’t work for a woman.

Perhaps it is time for new neutral vocabulary for royalty.

Related reading: How To Mince Your Words With Mincemeat And Minced Meat