Skip to content
You are here:Home » Grammar » Learn How You Can Control Your Writing In The Future Tense
Grammar
Updated January 14, 2021 Derek Haines 3087 Views

When you do, you would never think about how you use English grammar to construct meaning in your phrases. It is just a tense that comes naturally.

But would it surprise you to know that there is no such thing as the future tense or future tense verbs in English?

I’m sure you’re going to be aghast by me saying so. But I will explain how we use seventeen future forms in English.

In This Article Hide
What is the future tense?
How English constructs the future
The English future is all about the meaning
The seventeen future forms
Your future tense cheat sheet
Summary

What is the future tense?

It depends on your definition of a tense.

If you describe it as the structure of the verb to indicate time, then it is easy to say that the Simple Past is past tense because the verb generally ends in ed for regular common verbs.

For the Simple Present tense, a regular verb remains unchanged except for the third person when it needs an s.

The Present Perfect tense uses have or has, which are both present, followed by the past participle.

The Present Continuous uses am, is, and are followed by the present participle.

All past and present tenses in English are formed by modifying the first base form verb, irregular verb, or auxiliary, in a verb phrase.

But where are the verb modifications for simple future tenses and future progressive forms? In English, there are none.

In other languages there are. Verbs are modified by a set of endings to denote the future tense form.

For the future tense, Spanish uses the following endings to the infinitive form of the verb: -é, -ás, -á, -emos, -éis, -án.

In a similar manner to form the future tense, French uses the entire verb as the stem and then adds -ai, -as, -a, -ons, -ez, -ont at the end.

In English, however, there is no way to add anything to the form of the verb to indicate that it is a future verb.

If we take the verb to be as an example, be is the infinitive, am, is, and are, are the present forms, and was and were, are the past forms. But there are no future forms.

Therefore, unlike other languages, there cannot be a defined future tense in English.

How English constructs the future

There is no verb extension in English to express the future.

We build it by using modal verbs, present tenses, expressions, and time clauses when writing in the future tense.

There are seventeen basic future forms that we use. All of them have different and quite precise meanings.

To form the Simple Future, we use the modal verb will. But will has many meanings, and not all of them relate to the future.

For example, your fuel tank will hold around 26 gallons, expresses ability or capacity.

Or, you know, she will eat everything in the fridge, if I let her. He annoys me because he will keep interrupting me. These two define habitual behavior.

Modal verbs can change mode or meaning depending on the context.

So we can’t say that will is always a future modal verb, even though we think of it as such.

It is just one of the building blocks we use in English to make the future.

The English future is all about the meaning

For writers, you want to be precise when you are writing in the future tense.

Are you indicating a schedule, an arrangement, a prediction, or are you talking about plans?

When should you use the Simple Future tense, the Present Progressive, or the Future Perfect Progressive tense?

Can you use all of these elements in your writing and be sure that your meaning is accurate?

When you proofread and copy edit your text, are you sure you can define what you are trying to say?

If you are hesitating a little, read on.

Yes, there are a lot of ways to talk about the future in English.

There are even some future structures and tenses that we use to talk about the future in the past.

The following list consists of the primary forms that we regularly use in speaking and writing in the future tense.

There are examples of each form.

She has an appointment with her doctor on Tuesday.

I can’t come. I go swimming every Friday evening.

We’re having lunch with friends on Saturday.

Sue is getting her hair cut this afternoon.

3. Will – Use One: Prediction with no evidence

I hope I’ll have time to see you on the weekend.

Note: Will is usually contracted for this use.

4. Will – Use Two: Instant decision

That’s the phone. I’ll get it.

There’s no milk! I’ll have to buy some on my way home.

Note: Will is usually contracted for this use.

I said you will not be allowed to go out on Friday night.

You will have to wear a suit to the wedding.

Note: Will is always used in full for this use.

6. Shall – Use: Polite suggestion

We shall need money soon.

Shall we have lunch on Friday?

Shall I call Mary and invite her?

We’re going to buy a car.

Rebecca is going to Spain to learn Spanish.

I’m going to take a holiday in the summer.

8. Going to – Use Two: Prediction with evidence.

Look at those black clouds. It’s going to rain.

Oh, no! Twenty more applications. I’m going to be working until midnight.

Lucy is going to start her new job on Monday.

9. Future Continuous – Use One: Present prediction.

Don’t call them now. They’ll be having dinner.

Lucky Susan. She’ll be lying on a beach right now.

This time next week, I’ll be lying on a beach in Bali.

In June, I’ll be starting my new job in Rome.

I have to get some help, or I’ll be working all this weekend.

The train is about to leave.

I am about to prepare some lunch. Would you like to join me?

Quick! Sit down. The match is about to start.

12. Future Perfect – Use One:  Will be completed by or at a specific time in the future.

We’ll have been here for 10 years next year.

They’ll have been married for 20 years in July.

I’m sure I’ll have written my report by Friday.

13. Future Perfect – Use Two: Past prediction

Don’t call him. He’ll have forgotten.

No need to worry. I’m sure Sue will have passed her exam.

They’ll have arrived safely, I’m sure.

14. Past Future – Use One:  Something in the future at a past time.

I knew something was going to happen.

He said he was going to call me.

I had a feeling it was going to be a disaster.

15. Past Future – Use Two: Polite past referring to a future event.

He wanted to know what time the plane took off tomorrow.

I was calling to check when my appointment was for tomorrow.

She called her to see if she wanted to come with us this weekend.

16. Past Future – Use Three: Past prediction affecting the present.

I knew she would arrive before long.

That’s the door. I told you he was coming.

It’s beautiful! I couldn’t believe it when you told me you were buying a BMW.

Perhaps I could come on Friday if I have time.

She should arrive at about 2 o’clock.

Note: The conditional future can be formed with most modal verbs.

If you would like a resume of the basic future tenses, you can use the table below for your reference. 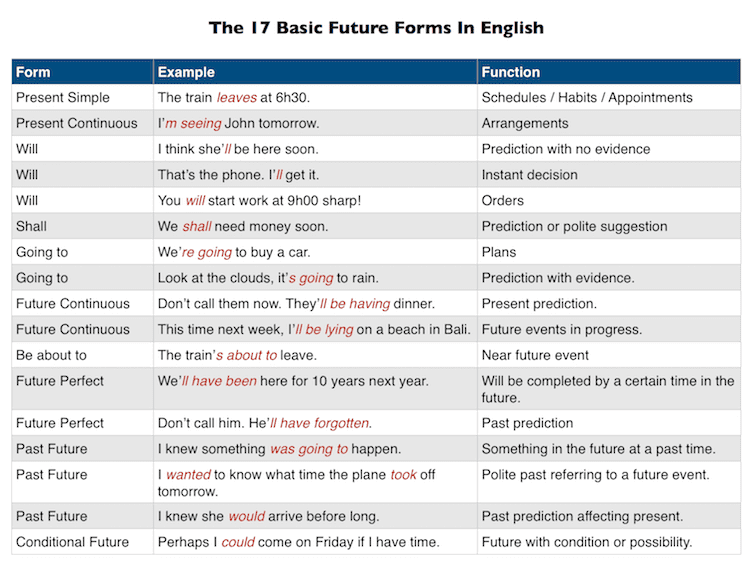 Future time tense control in English is not as simple as only using will and going to.

There are many ways that you can express the future.

You can choose from a whole range of tenses, registers, structures, and time clauses to clearly define your precise meaning.

When you are writing in the future tense, think about what you are trying to say and how you can vary your structures to give added variety to your writing.

So, what’s your future?