Skip to content
You are here:Home » Ebooks » How Many Ebooks Are There In The Kindle Store On Amazon?
Ebooks
Updated January 1, 2022 Derek Haines 20499 Views 11 Comments

How many books are on Kindle on Amazon?

It’s a number I have been tracking for some years now. In particular, how many ebooks there are in the Kindle Store.

The first Kindle ebooks appeared on Amazon in 2007. In that year, there were 88,000 ebooks available.

Every year since then, the number has increased rapidly.

In This Article Hide
How many books are available on Kindle now?
Number of ebooks in the Kindle Store (Original article)
48.5 million books on Amazon
It all started with book returns
Notes and updates

How many books are available on Kindle now?

It has become a guessing game since 2018. Before then, it was possible to accurately track the number of new Kindle ebooks published each year.

But it seems that Amazon cut off all the avenues to this data midway through 2018. However, by the best estimates, around one million new ebooks are published on the Amazon Kindle Store every year.

You can see the year-on-year growth of how many books are on Kindle in the graph below. 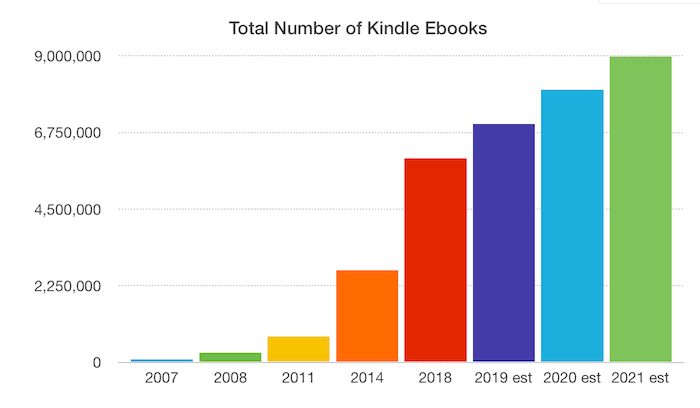 As you can see, up to 2018, the numbers could be verified. Since then, I can only estimate the total number of ebooks being published each year.

I have updated this article many times over the years. You can read on to the contents of the original article, which includes notes and references that I used to keep track of developments.

Number of ebooks in the Kindle Store (Original article)

Update: Read our newer related article revealing that 30,000 new Kindle ebooks were published on the Amazon Kindle Store in only four days.

With the popularity of ebooks, the question of how many ebooks are available on the Amazon Kindle store has been asked many times.

But Amazon keeps this information about how many ebooks there are on Kindle very close to its chest. So it has been a difficult question to answer definitively.

But some time ago, Claude Nougat found a clever way to find the answer to this question using Amazon Associates.

You can read about it in his blog post. At the time, there were, in fact, close to 3.4 million ebooks listed on the Kindle Store.

Using the same method at the time, I found that the total had increased by 20,000 only a few days after his post. 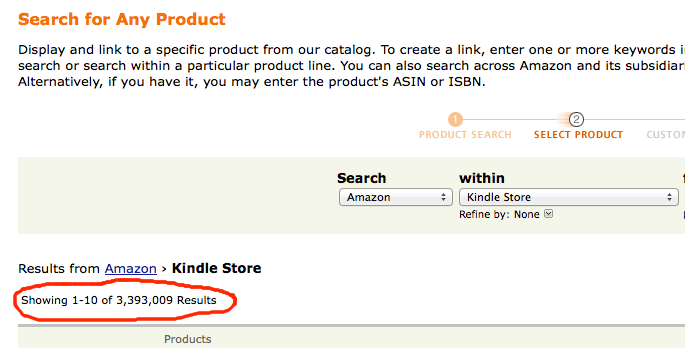 I was not surprised at the number. Nor with his calculation that a new Kindle ebook was published every five minutes.

With the growth in tablets, larger smartphones, and of course, dedicated e-readers, the demand for ebooks is increasing.

As is the motivation for people to write new books and become published authors in the hope of gaining sales in a new and vibrant market.

So yes, you could say that 3.4 million was a lot of ebooks.

What I was more interested in, though, was how many books in total there were on Amazon?

I found the answer to how many books on Amazon using the same home screen search technique on Amazon Associates and was quite astonished at the number I found.

Unfortunately, it is no longer possible to access the data, as shown in the screenshots above. Amazon removed this facility from Amazon Associates a few years ago.

But there is a way to estimate the number of new ebooks being published each day, week, and month by using Amazon Advanced Search.

You can learn how to find this data in our article about how to track Kindle ebook publishing numbers approximately.

That surely must be somewhere close to every single book in existence. Perhaps there are titles including many out of print books.

Or give or take a few ancient papyrus scrolls and stone-carved tablets.

It also says that no matter what anyone thinks, believes, or tries to deny, Amazon has built a book sales and distribution empire. So it can, will, and does control the book publishing market.

Some see this as a monopoly, which, by many, is the definition of a bad thing. Maybe so, but it’s a fact of life now. So, it is the end of the argument.

But it is interesting to remember where and how Amazon started, way back in the nineties. Amazon was built on the back of selling book returns from the then six major publishers.

These were books that had been returned because they were unsold in bookstores. Because they had no commercial value, they were destined to be pulped.

It was Jeff Bezos who realized they had some value. Instead of hundreds of thousands of books being recycled to make cardboard packaging, he sold them online.

It all started with book returns

What the big six publishers had always thought of as trash, Bezos and Amazon slowly turned into a huge goldmine.

In fact, perhaps little has changed since those early days of Amazon.

Major publishers still look down on self-published titles as trash, similar to those 90’s returns. But Amazon continues to make money from both and makes the running in the publishing market.

Yes, perhaps Amazon has a monopoly.

But this position of power was handed to Jeff Bezos and Amazon on a silver platter.

The traditional publishing industry that was, and in some ways, still is holding onto the belief that their 19th-century business model will work in the 21st century.

With 48.5 million books available on Amazon, it tells me that they may well be wrong.

It hardly matters, though. It is clear that from the biggest traditional publisher, right down to the latest first-time self-published Kindle ebook author, they all need Amazon to sell their books.

The only remarkable statistic in all this is that there are only 3.4 million ebooks in the Kindle Store. That is less than a mere 10% of all the titles Amazon has on its shelves. Clearly, the ebook and self-publishing market is still very young.

With the popularity of Kindle devices, Kindle apps, free Kindle ebooks, Kindle Unlimited, Prime Reading, Kindle Singles, free reading apps, and an ever-increasing number of Amazon Prime members, the only way forward is up for Amazon with ebooks.

Even though fewer people buy a Kindle today, phone and tablet reading is increasing for customers with an Amazon account. So the sales of Kindle ebooks continue to grow.

Update Notes: As you can tell by reading the article above, it was first published quite some time ago.

But it is still relevant to understanding how Amazon and the Kindle Store have become so omnipresent in the book market, from New York Times bestsellers to one-time Indie self-publishers.

The new innovation of combining audio series and Kindle ebooks is likely to be another winning move.

When you buy a Kindle or Fire tablet, your only choice is to buy Amazon ebooks or access Kindle book deals. By refusing to use the industry-standard .epub ebook file format, Amazon can control its market.

Another interesting observation is that Amazon decided to close off access to the data of the total number of ebooks in the Kindle Store.

It is hard to understand the reasoning behind the move unless Amazon is embarrassed about the ever-increasing number. But it is now impossible to use the technique explained above in the article.

However, there was another way to get an estimate.

Click the related reading link below to read our more recent article explaining how to find an estimate of the total number of ebooks in the Kindle Store via Wikipedia. It states that there were 6 million books in early 2018.

Hearsay estimates of a new Kindle book being published every few minutes would seem to be entirely realistic and even on the light side of the ledger.

Between 2014 and 2018, the total grew from 3 million to 6 million. This means that 750,000 Kindle ebooks were published each year between the two dates. This equates to one new ebook entering the Kindle Store every one minute and forty-two seconds.

That is certainly, a lot of ebooks.

To put things in perspective, though, it is still a very long way to go for ebooks to equal the number of books Amazon has available for sale.

Unfortunately, Amazon removed access to this data for Wikipedia sometime in 2019.

There seems to be only one way now to estimate the number of ebooks available on the Kindle Store.

Thanks to research by Ebookfriendly, you can use a Google search string to get an estimate.

When I say an estimate, it is exactly that, and the results vary considerably depending on your Google search settings and location.

I used the search string suggested. You can copy and paste the string below to try for yourself.

Somewhere between the two is probably a good guess. But either way, it’s a lot of ebooks.

Related reading: Update – There are now over 6 million ebooks in the Kindle Store, and the number is rising rapidly by the day.

How To Delete An Ebook On Smashwords Or Draft2Digital

How Can You Buy An Ebook And Make Sure You Can Keep It?

Why Do Short Kindle Ebooks Seem To Sell So Well On Amazon?

11 thoughts on “How Many Ebooks Are There In The Kindle Store On Amazon?”

This website uses cookies to improve your experience while you navigate through the website. Out of these, the cookies that are categorized as necessary are stored on your browser as they are essential for the working of basic functionalities of the website. We also use third-party cookies that help us analyze and understand how you use this website. These cookies will be stored in your browser only with your consent. You also have the option to opt-out of these cookies. But opting out of some of these cookies may affect your browsing experience.
Necessary Always Enabled
Necessary cookies are absolutely essential for the website to function properly. This category only includes cookies that ensures basic functionalities and security features of the website. These cookies do not store any personal information.
Non-necessary
Any cookies that may not be particularly necessary for the website to function and is used specifically to collect user personal data via analytics, ads, other embedded contents are termed as non-necessary cookies. It is mandatory to procure user consent prior to running these cookies on your website.
SAVE & ACCEPT
Posting....