How do you write reported speech dialogue?

When you start to learn to write dialogue, it seems simple. All you need to do is add a reporting verb or dialogue tag.

You probably learned this at high school. When a character speaks lines of dialogue, you put a double quotation mark at the beginning and end.

But if you use reported speech, you need to include a tense shift.

What’s the difference between dialogue writing and reported speech?

Most dialogue uses active speech. It is what a character says.

Let’s look at the difference.

When you write dialogue, you are using direct speech.

You are using the exact words that the character says, and then adding a dialogue tag to say who spoke the words.

“I’m going into town this morning. I should be back before dinner,” she said.

The reporting verb is almost always in the simple past verb tense, which is the general rule for fiction writing.

It doesn’t matter which tense the dialogue is using.

It can be present continuous, present perfect, or present simple.

“I’m having friends over for dinner tomorrow night,” he said.

“I’ve had friends over for dinner quite often,” he said.

“I have friends over for dinner all the time,” he said.

You can also use the present simple tense for reporting verbs in some circumstances.

It is when you want to say that someone says something often or all the time.

“When I get older, I think I’ll travel the world,” she says.

“I’m going to buy a Ferrari one day,” he always says.

But you wouldn’t use the present dialogue form in most fiction writing.

In reported speech or indirect speech, we may not necessarily use the exact words of the speaker.

It is often used to convey small talk or gossip about what other people said.

It is also used to paraphrase long speeches or extended discourse.

We can use both past and present tense in reported speech. But again, the past is much more common.

She said she was going into town that morning and that she should be back before dinner. Past form

He always says that he is going to buy a Ferrari one day. Present form

You need to format dialogue with punctuation and quotation marks. But you write reported speech as a standard sentence.

You include the attribution and reporting verb without punctuation.

When you use the past form, you need to pay special attention to the tense shift.

No matter what tense the original utterance used, reported speech always uses the past.

It is because it is something someone said in the past. It is an action that occurred in the past, so we refer to it as a past event.

Compare the difference between these direct and indirect sentences.

The general rule is that active speech in present or future tenses shifts back to the past simple.

When active speech is in the present perfect, it shifts back to the past perfect.

But for past simple active speech, it can shift back to past perfect, or stay in the past simple.

In all forms, the relative pronoun, that, is optional.

When you incorporate reported speech within a character’s dialogue, you need to keep the tense shift.

Here are some reporting dialogue examples.

“Oh, yes. I saw her yesterday, and she told me that she was going to France next month,” Anne replied.

“I didn’t feel well this morning, so I called my boss to let him know. There is an important meeting this afternoon. But my boss said that it was okay and that he would get someone else to take the minutes. I still feel guilty, though,” Jane said.

“I saw Michelle this morning, and she told me that she had been waiting for days for the results of her blood test. I’m not sure what’s wrong, but she looked worried,” Susan said.

The rest of the direct written dialogue can be in any tense or form the speaker uses.

There are five basic aspects of good dialogue punctuation.

1. All punctuation is inside the quotation marks.

2. Using an em dash or ellipsis.

We use em dashes to indicate a speaker was interrupted. You add an ellipsis when a speaker’s words trail off, or when an utterance is incomplete.

“I was planning on buying–” she started.
“No way! I told you we need to save money,” he said.

“It’s funny when you think about things, and well …” Anne said.
“You think too much, Anne,” Mary said.

3. Start a new paragraph for a new speaker.

It is confusing for a reader if the dialogue runs on in the same paragraph.

When there is a new speaker in dialogue, always start in a new paragraph.

Dialogues are usually short and sharp.

But you might have a piece of dialogue that is more of an oration, and you need to divide it into paragraphs.

You can use an opening and closing quotation mark for the whole dialogue.

Another option is to add one opening quotation mark at the beginning of each new paragraph and then close the final paragraph.

It is up to you whether you use curly, straight, double, or single quotations.

In his book, Cloudsteet, Tim Winton uses no quotation marks at all for the dialogue. But it is still great dialogue.

Generally, readers won’t mind what your choice is.

But they will be distracted or confused if you mix different types of quotation marks.

It isn’t an easy check as you are proofreading. But there is an easy way to make sure you are consistent.

Try using an online writing app to help you.

If you use Prowritingaid, you can check your whole manuscript by ticking Dialogue Tags Check in your combo settings. 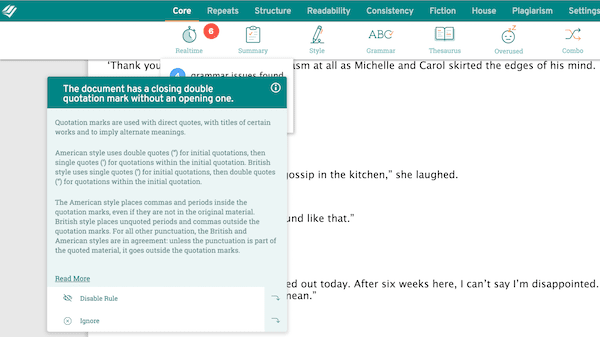 For Grammarly users, you can find any errors in your Correctness tab.

It will show you any quotation mark inconsistencies.

Once you know how to write active dialogue and reported speech, it is easy to combine the two into reported dialogue.

But reported speech is indirect, so it always needs to use backward tense shift into the past.

The most critical part of good dialogue writing is your use of correct and consistent punctuation.

When you get it right, a reader doesn’t notice it. They become blind to it.

But if you have inconsistencies, it stands out and can become annoying.

More reading: Can you use question tags in fiction writing?