Skip to content
You are here:Home » Writing » What’s The Difference Between Denouement And Epilogue?
Writing
Updated December 20, 2021 Derek Haines 6120 Views

What’s the difference between denouement vs epilogue? The denouement and an epilogue are both literary devices.

For new writers, it is worth understanding the difference between these two elements of a story.

While not always essential in short stories, a novel will always have a denouement.

Gustav Freytag, a German novelist and playwright, outlined the five parts to a plot.

Look at the Freytag pyramid below. The plot of a story is made up of five parts: exposition, rising action, climax, falling action, and denouement. 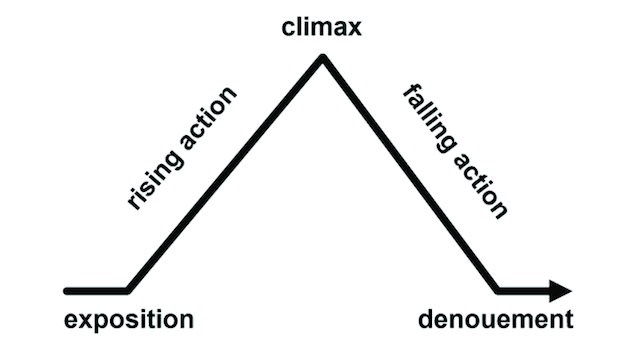 The exposition could also be called the introduction, while denouement could entail resolution, revelation, or even catastrophe.

What is the Denouement?

Dénouement derives from an Old French word, desnouement, meaning an untying. From French desnoer, from des-, de- + noer, to tie. To undo, unknot, or untie from old French.

In a literary work, you can define denouement as the final part of the story when all the elements are satisfactorily concluded.

And they all lived happily ever after, encapsulates in simple terms the sense that all the knots in a story are resolved.

In other words, the denouement definition is when an author ties up all the loose ends.

Think about some detective mysteries you have read. It is when the detective often gathers some characters together to explain how he or she solved the case.

For a romance story, after the climax of untying all the misunderstandings, misadventures and missteps, and perhaps threats to commit suicide, the denouement will explain how happy the hero and heroine will be in the future.

However, for authors of a series of novels, sometimes there is a need to create anticipation for the next book. A cliffhanger ending is the most common device.

But you should be careful about using this ending technique for a stand-alone title.

Unless you know what you are doing, it could leave readers dissatisfied. They could feel let down after reading hundreds of pages that lead to an open ending.

Following a period of intense climax, a well-written ending or denouement should begin to let your reader come down slowly from all the action.

Another critical point for writers to remember is Chekhov’s Gun.

“If in the first act you have hung a pistol on the wall, then in the following one it should be fired.” Anton Chekhov

It is an excellent reminder to make sure you have not left any unfired pistols in your story.

While the denouement can be used for this purpose, it should not be where a lot of forgotten loose ends in a story are conveniently tidied up.

Every story must end. It is up to the skill of the author to write an ending that will be satisfying for the reader.

What is an Epilogue?

From late Middle English: from French épilogue, via Latin epilogus and Greek epilogos, from epi ‘in addition’ + logos’ speech.’

The difference between denouement and epilogue is that one comes before and one after “The End”.

From the definition of the word epilogue, it pertains to a speech in addition to and after the story has concluded.

Although less popular today in literature, it is a part of a book where the author will speak directly to the audience or reader.

The author may discuss the fates of the characters or add information that was not relevant to the story.

It is the opposite of a prologue, which comes before a story starts. Again, it is a part of literature that has lost favor in recent times.

Once you know the difference between denouement vs epilogue, it is easy to define where they will fit in your story.

One is a conclusion or resolution. The other is an afterthought.

The most important point to remember is that all books will have a denouement. It is an essential part of the plot.

But very few stories will contain or need an epilogue.

Related reading: Are You Writing A Memoir Or Autobiography? How To Tell