Skip to content
You are here:Home » Writing » 350 Other Words For Said For Your Dialogue Writing
Writing
Updated September 29, 2022 Derek Haines 10461 Views 5 Comments

Do you need more synonyms to find other words for said?

Dialogue words, or tags, should be used as a seasoning and not as the main ingredient in your writing.

Readers have a blind spot for the word said, so you can use it without any concern when you write dialogue.

Stephen King wrote in On Writing, regarding dialogue tags. “The best form of dialogue attribution is said, as in he said, she said, Bill said, Monica said.”

However, there are times when you can use said synonyms.

They help you to convey an extra element of emotion or tone of voice.

When you use a descriptive dialogue reporting verb you can avoid the use of adverbs.

I am sure every writer has read this quote about adverbs by Stephen King.

“I believe the road to hell is paved with adverbs, and I will shout it from the rooftops.”

When you are writing dialogue, you need to be aware that dialogue tags are the tones of voice of the author and not the characters.

So keep your dialogue tags to a minimum.

When only two characters are speaking, it is often possible to avoid using them almost completely in a conversation between the characters.

But when dialogue tag verbs are necessary, think about your choice of vocabulary.

Of course, go very easy on your use of adverbs.

Other words for said

There are times when you might want to make a line of dialogue a little more expressive.

Perhaps in a novel or short story, selecting other words for said can help you.

The infographic at the end of this article gives you a full list of 350 words you can use in place of said.

There is also a full-text listing with words for said categorized by emotion or association.

Using a one-word reporting verb is a much better alternative than adding an adverb to a dialogue tag.

They are quick and to the point. But they still give a sense of an understandable emotive description.

Here are a few simple examples.

Bad: “Where did they find it?” he asked curiously.

Better: “Where did they find it?” he wondered.

Bad: “Why did you do that?” he asked angrily.

Better: “Why did you do that?” he snarled.

Another quick and easy way to find a new synonym is to use an online grammar checker.

For a Grammarly user, you are only one right-click away from a long list of suggested replacements for words to use instead of said. 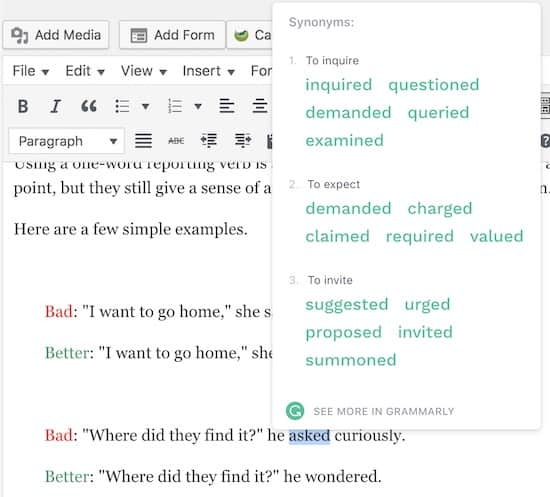 If you use ProWritingAid, you can get even more help with both simple or contextural choices for said synonyms. 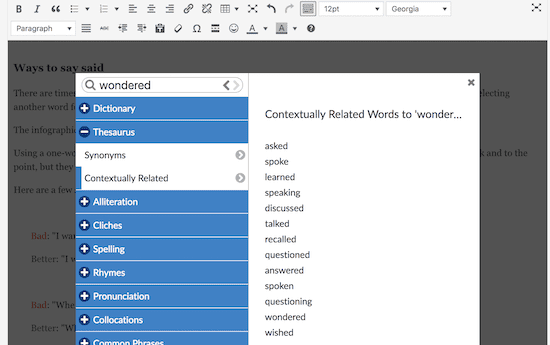 Other words for said by emotion

Before we get to the full list of 350 verbs to replace said, here is a quick concise selection.

They are listed by emotions and situations that you might want to use as a quick reference for your characters’ conversations.

Here is the full list of verbs you can use instead of said.

You can use the infographic below for your writing reference. Or you can share it on your blog with your readers.

If you prefer, you can also view and download the infographic in pdf.

Feel free to copy and paste these words to replace said for your own use.

The emotion of ANGER

The action of ANSWERING

The emotion of DISGUST

The emotion of EMBARRASSMENT

The emotion of FEAR

The emotion of HAPPINESS

The emotion of LOVE or ROMANCE

The emotion of SADNESS

The emotion of SURPRISE

Words associated with QUESTIONS or CURIOSITY

Words associated with UNCERTAINTY or CONFUSION

Summary of words other than said

Synonyms can always improve your writing by avoiding repetition.

Finding new words and new ways to say things is one of the pleasures of being a writer.

It doesn’t mean that you need to use long, uncommon, or complex vocabulary.

There are usually very simple alternatives for most words.

Considering other words instead of said is always a good idea. That’s even if said is a word that most people are blind to when reading.

By replacing said with a more active reporting verb, you can quickly add much more descriptive value to your novel or short story.

Related reading: How To Check Dialogue Writing Consistency In Your Manuscript

Is It Peeked, Peaked Or Piqued My Interest? Are You Curious?