Skip to content
You are here:Home » Grammar » When You Can Use Burned Or Burnt And Learned Or Learnt
Grammar
Updated November 1, 2021 Derek Haines 273 Views 0 Comments

Burned or burnt and learned or learnt are two of a small group of verbs that can end with either ED or T.

However, in either form of English, you can sometimes make specific choices for the past simple, past participle, or adjective.

Whichever form of English you use, there will be times when you need to decide which variation is correct or simply the best choice.

In This Article Hide
The problematic past simple verbs
Burned or burnt?
Frequency of use
Learned or learnt?
Other verb pairs
Conclusion

The problematic past simple verbs

Regular past simple forms in English end in ED but have three different sounds.

Think here of verbs like telephoned, asked, and wanted. The pronunciation is d, t, or id.

But many past simple verbs always end with a T.

They are all irregular verbs, but there are no variations possible.

There are also a set of short verbs that always end with T in any tense.

Then to add to the list, many verbs end in ED and but are pronounced as a T.

But verbs such as burned and burnt belong to a very small group of ten verbs that can change endings.

It often depends on variations of English, the use of the word, and even on the advice of a particular style guide as to how you use each one.

Let’s look at a couple of examples to explain how you can use some of these variations.

You can use either form for past simple, past particle, or as an adjective.

The ED form is more commonly used in American English for the past simple and past participle than in British English.

But for an adjective, it can also depend on the duration of an event.

For an event of a long duration, the ED form is often the right choice. But for a short or instant event, you can use the T version.

The house burned for hours. (Long)
Oh no, the toast is burnt. (Short)

It is interesting to note that the frequency of use of these two forms of the verb burn has changed over time.

Google has a terrific graphing tool called ngrams to check on word usage over the years.

Here is a graph of the use of the two words in British English. 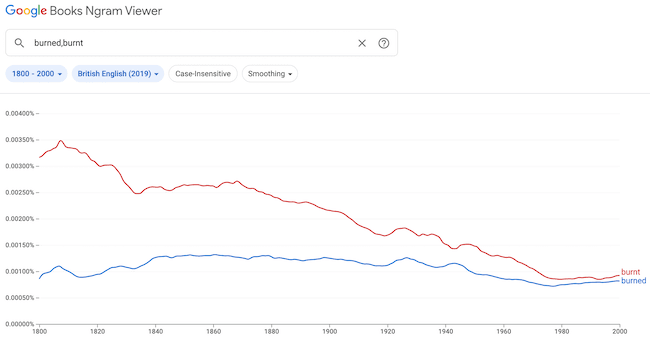 You can see that while burnt has reduced in use over two hundred years, its use is still now about 50-50.

But as you would expect, the usage in the US is a different story. 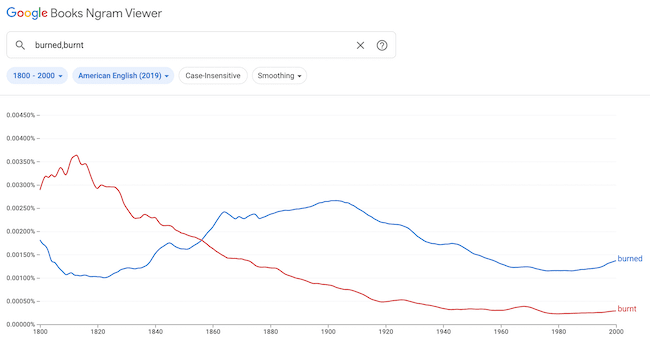 Interestingly, up until the mid-nineteenth century, burnt was more common. But since then, burned has been the most used form in US English.

Because this graph uses data from Google Books, you can also check the usage in fiction. 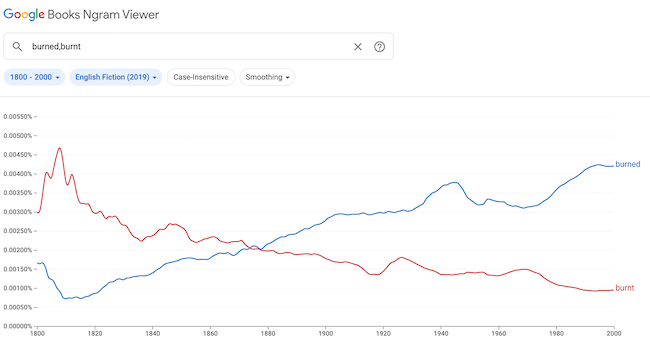 Clearly, in fiction, burned is by far the most frequently used variation of the verb, but burnt is still in regular use.

The choice is up to you with these two variants of the verb. You can’t really go wrong because both are correct.

But you might want to choose between forms when it’s an adjective.

The use of either form is similar to burn, but the verb learn has a third variation.

When we use it as an adjective to describe someone who acquired knowledge through study, we always use learned.

But the pronunciation of the word is different from the verb. It is ‘lerNED’. That’s why the adjective form is always ED.

You find a similar variation with the word beloved. It can be pronounced as a regular ED form or with emphasis such as in the expression, dearly beloved.

However, unlike burn, with learn it is the duration of the verb action and not the adjective that can decide your choice.

It took a long time before I learned how to play the guitar well. (Long)
I think he learnt from his silly blunder. (Short)

Surprisingly, while certainly not in everyday use, the word learnt is making somewhat of a small revival in all forms of English. 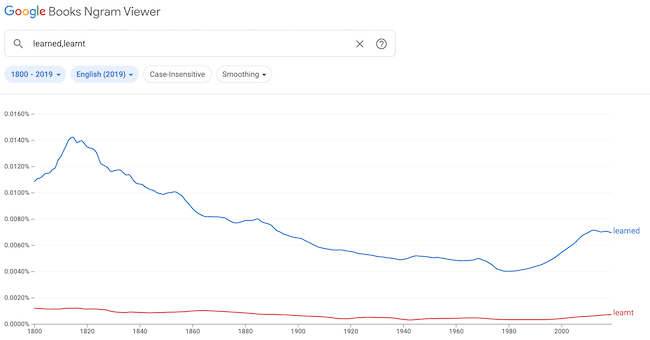 I’m not sure why this is so, but clearly, some writers have learnt or prefer to use the T alternative.

With most of the ten past verbs that can use ED or a T, the usage is similar.

Generally, if you write in American English, you will use the ED form.

If you write in British English, you will probably use the T form a little more.

But for the words spelled and spelt or leaped and leapt, and dreamed and dreamt, the ED form is now much more common.

The T forms, while still in use, have slowly reduced in frequency.

However, be careful with some verbs and adjectives in fixed expressions, idioms, and quotations.

There is no sense in crying over spilt milk.

Burnt to a crisp.

One is spoilt for choice.

Leapt at the chance.

Knelt in front of the altar.

Apart from fixed language, you can choose whichever form you think works best for your writing.

The evolution of past tense verbs in English has been progressing towards more regular forms for a long time.

But a handful of old verbs remain that have defied the trend. Will they all gradually lose the T? Probably.

When you check the usage, you can see that all of the ten verbs that can optionally take a T are slowly becoming more regular with the ED suffix.

But until the day that the T disappears altogether, you can still use it for variety, tone, or simply because you prefer to use it.

One last reason to keep these odd T verbs is that they still come in very handy for Scrabble players.

Related reading: What Is The Subjunctive Mood And When Should You Use It?