Skip to content
You are here:Home » Grammar » US English Has Never Really Been (Present) Perfect, Has It?
Grammar
Updated November 1, 2021 Derek Haines 6616 Views

The present perfect tense and its aspects are used more often in British English than in US English.

It is one of the subtle distinctions between the two most spoken forms of English.

This is why it is important for a writer or author to be careful.

You need to maintain a consistent grammatical form, lexical style, and voice.

Look at the use of the present perfect in the following paragraph.

“While I have only ever been to the United States five times, an American friend told me that he only went to Europe twice.

Although having had several enjoyable holidays in the South of the US, I hadn’t travelled at all to any of the Northern states.

He told me that I missed some of the best parts of the country, and I agreed that I probably had. We’ve kept in touch since.

He calls me on his cell, and I call him on my mobile.”

Simple past or present perfect?

US English uses the simple past more often to talk about life experiences.

Whereas in British English, the present perfect is almost always used to express similar notions.

It is because of its tense concept of unfinished time.

In the sense of experience, the unfinished time is the speaker’s life.

Also, in the small example above, the gerund form of the present perfect (having had) is less used in US English.

Yet, it is extremely common in British English, especially in writing.

Then there are vocabulary and spelling differences. It is in these two elements that the two big English speaking worlds divide dramatically.

More reading: The past perfect tense

The diversity of the English language

There are many differences between the most common forms of Standard English – US, British, Australian, South African, Canadian. and Indian.

But there are many forms of Standard English, as this list on Wikipedia illustrates, as well as in the image below. 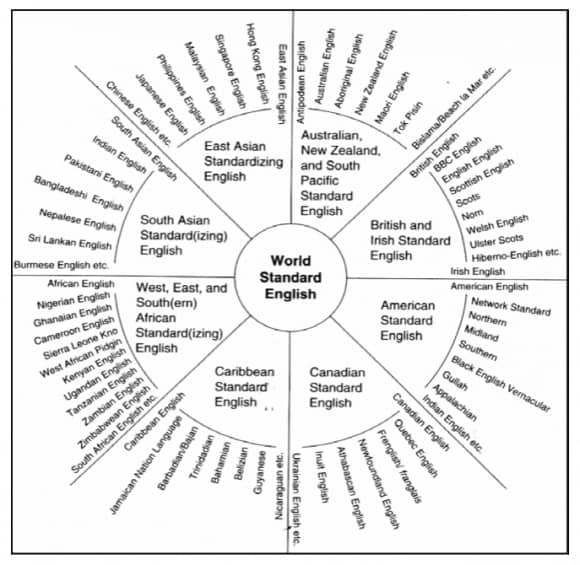 Standard English is not as standard as it sounds because English is far from standard.

What it means is that whatever form of the English language is used and accepted as a national norm in an English-speaking country, it is accepted as Standard English.

This encompasses all the language points of grammar, vocabulary, and spelling.

Another factor adding to the variations in the English language is in parts of the world where English is used widely but as a second language.

In Europe, in particular, the use of English is becoming quite normal.

However, it is evolving into a totally different form of English. It is because people using English in Europe have such a wide range of first languages.

If you have an interest in the evolution of European English, this English Style Guide produced by the European Union is worth reading.

All of these different forms of Standard English pose a problem. Not only for writers but also for copy editors and proofreaders.

Maintaining one style or form of Standard English in a book, or even a blog post, is more difficult than you may think.

It takes a lot of effort to find errors with consistency.

I have read a number of books in British English, only to find words such as realized and color in US spelling.

And then in other chapters, they reverted to realise and colour.

Mixing forms of Standard English in writing, especially in spelling, is an annoyance and distraction for readers.

So, has your English writing been (present) perfect recently?

One thought on “US English Has Never Really Been (Present) Perfect, Has It?”