Skip to content
You are here:Home » Grammar » Comma Before Or After But? When To Use A Comma
Grammar Popular
Updated November 25, 2022 Derek Haines 25815 Views 10 Comments

When do you use a comma before or after but?

You use a comma before but when you connect two independent clauses. It means each clause has a subject and verb.

There is no comma before but when you join an independent and dependent clause. In this case, the second clause has no subject and verb.

You only need to use a comma after but when it’s followed by an adverbial clause or interrupter.

The comma with but

Yes, you often need to add a comma.

There are two simple rules for you to remember.

After you do, it will be easy for you to decide.

All you need to do is look at your complete sentence to know when a comma is required.

If you follow these two rules, you’ll get the comma right every time.

There are two basic and simple rules to follow for comma usage.

1. You insert a comma when the two halves of your sentence can stand alone.

2. You omit the comma when the two sentence halves can’t stand alone.

When do you use a comma before but?

To make sure you are correct, check if your sentence joins two independent clauses.

In this case, both clauses will have a subject and a verb. If each part of your sentence is independent, they can stand apart as whole sentences.

Then but, which is your coordinating conjunction, needs a comma to separate your two clauses. Here are some examples of when to use a comma.

I wanted to go out for breakfast but my local café was closed. Incorrect

I wanted to go out for breakfast, but my local café was closed. Correct

This is because each part of the sentence can stand alone as an individual complete sentence.

Each one has a subject and a verb, so you are connecting two independent clauses.

I wanted to go out for breakfast. Complete  My local café was closed. Complete

He left home early, but he forgot to take an umbrella. Correct

My sister is leaving for Canada tomorrow, but she will return in three weeks. Correct

Susan doesn’t like sardines, but her sister loves all kinds of fish. Correct

We wanted to go to Spain for our holiday, but the hotels are too expensive in summer. Correct

I meant to buy some bread, but I forgot to stop off at the bakery. Correct

When do you omit the comma?

If the second part of a sentence is a dependent clause, there is no comma.

This happens when you cannot make a logical sentence from the second clause because it depends on the first clause for its meaning.

It is because there is no subject with a verb in the second clause.

Look at these examples.

The restaurant was fantastic, but very expensive. Incorrect

The restaurant was fantastic but very expensive. Correct

You can see that the second phrase is not a complete sentence.

Studying grammar is hard sometimes but interesting all the same. Correct

I went to the concert but left early with a headache. Correct

The rest of the sentence was easy to write but with poor spelling. Correct

Going to the gym is tough some mornings but good fun all the same. Correct

He played as well as he could but lost the match. Correct

The example sentences above show that there is no subject with a connecting verb in the second clause.

Be careful, though, because there can be a verb. If the verb doesn’t have a subject, it is not an independent clause.

You can see this is the last example sentence above with the verb lost.

When do you use a comma after but?

If you start a sentence with but, you don’t need to use a comma.

You might want to refresh your memory about starting a sentence with but.

You only add one when there is an adverbial clause or an extra word or phrase following it.

Think of it at the beginning of a sentence as marking an interruption to a sentence.

But, yes, indeed, there is plenty of space in the car for you.

But, on the other hand, I might go to Spain instead.

I was going to buy tickets for the new show, but, in fact, my husband had already bought them for me.

But, if you really want to know the truth, I can’t stand my boss.

College isn’t easy, but, well, you know how it is.

The good news about the rule

Does the comma go before or after but? Now you know the answer.

You have mastered the rule. I told you it was super easy.

I have more good news for you.

You can use the same three-part rule for a sentence with and, or, yet, and so.

1. Use a comma before the conjunction when the sentence halves can stand alone.

2. Don’t use a comma before the conjunction when the second clause can’t stand alone.

3. Use a comma after the conjunction when it is followed by an interruption.

Examples before and, so, yet, and or

He went to London for two weeks, and he stayed at an expensive hotel.

Susan loves her cat, and she lets it sleep in her bed.

Mary loves her dog, yet she doesn’t let it onto her bed.

There was no chance of changing our flight, so we had to stay for two more days.

Tim missed his train, so he was two hours late for the meeting.

You can try for a free upgrade, or you can pay extra to be sure you get it.

My advice is don’t pack too much, or you will be charged for excess baggage.

Examples after and, so, yet, and or

He went to London for two weeks, and, just like him, he stayed at an expensive hotel.

Susan loves her cat, and, naturally, she lets it sleep in her bed.

Mary loves her dog, yet, like many dog owners, she doesn’t let it onto her bed.

There was no chance of changing our flight, so, unfortunately, we had to stay for two more days.

A comma after and before however

Because you can use however as a synonym for but, it is worth noting this extra related rule.

Does the comma go before or after however? It can be before, or before and after.

If you use however, therefore, furthermore, or moreover at the beginning of a sentence, there is always a comma after the adverb.

However, she expects to finish her novel by summer.

Furthermore, we will buy twenty copies of your new book.

Therefore, we will be an active promoter of your new novel.

Moreover, we would like to write a review for our newspaper.

When you are joining two independent clauses, however, take care.

You could wrap the word however in two commas. But for conjunctive adverbs, it is always better to use a semicolon.

I plan to finish my book by summer; however, it could be a little later.

I received your suggested edits; therefore, I’ll take your advice and start on my second draft.

The edits were incomplete; moreover, it seems that the proofreading was poor.

You missed so many errors; therefore, I think I will need to find a new editor.

If you use these adverbs for emphasis, it is quite easy. Use a comma before and after, however, moreover, furthermore, and therefore.

You can, however, proceed with the corrections.

It was, moreover, a very poor effort.

It is, furthermore, out of my control.

You may, therefore, continue with the project.

It is easy to learn the punctuation rules for coordinating conjunctions.

You can also use a reliable grammar checker to help you check and correct your comma usage. 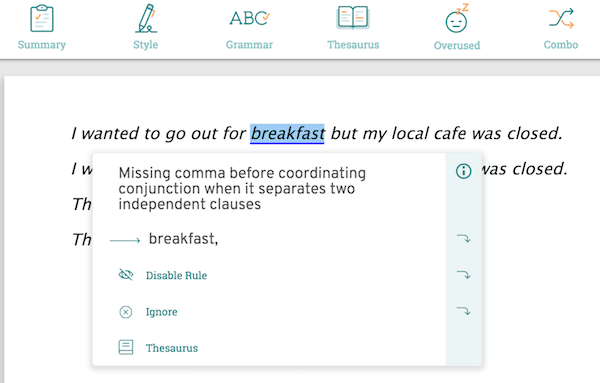 Just take a few minutes to make sure you understand the basic rules, and then lock them away in your memory.

Yes, there are some complicated rules that can cause confusion. The ones for cumulative and coordinate adjectives or a comma splice can be a bit tricky.

It is true that punctuation can be complex and often open to interpretation. It is especially so for the Oxford Comma.

Luckily, the rules in this article are easy. So you can leave all the other comma rules for another day.

I’m always reminded of this quote when I think about punctuation.

“I spent all morning putting in a comma and all afternoon taking it out.” – Oscar Wilde.

Related reading: Use A Comma Before And In A List

10 thoughts on “Comma Before Or After But? When To Use A Comma”