Skip to content
You are here:Home » Grammar » Never End A Sentence With A Preposition – A Rule To Bow To?
Grammar
Updated June 14, 2022 Derek Haines 93 Views 0 Comments

Is it okay to end a sentence with a preposition? It’s not a rule I get hung up on.

Yes, it was a writing rule drummed into our heads at school. But it serves little useful purpose now in writing.

When you try to avoid a preposition at the end of a sentence or question, some can become awkward.

Sometimes it’s impractical to rewrite sentences such as; I don’t know what to write about or where do you come from?

In This Article Hide
Don’t worry (too much) if you end a sentence with a preposition
When you should remove the preposition
What about phrasal verbs?
The disappearance of whom changed the rule
When to obey the rule
There’s no rule now, so you can’t break it
Conclusion

I qualify this because, in informal and creative writing, it’s usually okay.

But that doesn’t mean that it’s always true. Sometimes it’s better to rewrite and move or delete the preposition.

It’s not about grammar but style, variety, and a reader’s expectations.

My grammar checker always gives me this warning:

Formality.
Some readers may object to a preposition such as with at the end of a sentence. Consider rewording the sentence if your readers are likely to object.

It’s a valid caution because the only real issue with sentences ending with a preposition is with register and consistency of formality.

There is still some hesitancy towards preposition stranding for academic, scientific, and other forms of very formal writing.

For all other forms of writing, most editors and style guides agree that the rule no longer applies.

But you still need to take some care.

When you should remove the preposition

If it’s not necessary or simply wrong, then delete it.

For example, when a preposition is unnecessary.

Look, this is where I’m going ?

Look, this is where I’m going?

What are you studying ?

What are you studying?

Sometimes it is easy to change a sentence to make it read better.

What are you doing that for?

Why are you doing that? (Better)

I can’t recall what year he got elected in.

I can’t recall in which year he got elected. (Better)

It’s a choice for a writer to decide when a sentence needs a quick edit.

What about phrasal verbs?

With phrasal verbs like give in, take on, look into and put up with, what looks like a preposition is a particle or adverb.

So there is no need to worry about these at the end of a sentence.

Winston Churchill is often cited for, up with which I will not put, but there is some disagreement about the origin of the phrase.

However, the example illustrates how you need to be a grammatical gymnast to avoid ending a sentence with a particle.

Particles and adverbs at the end of sentences are not worth looking into.

The disappearance of whom changed the rule

From the mid-nineteenth century, the object pronoun whom started its slow decline in use. 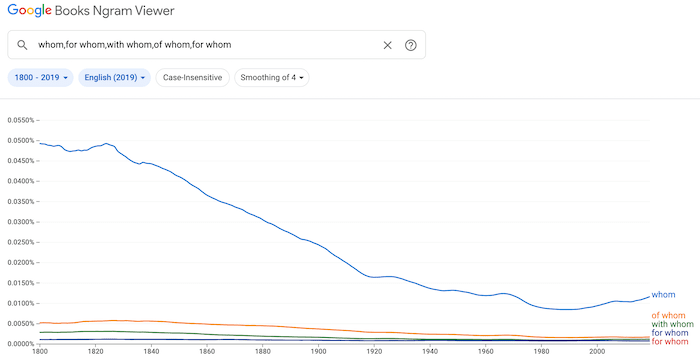 But without it, and being replaced by who, it became much more challenging to avoid sentences ending in prepositions.

Except for, to whom it may concern, it is a word that is in very rare use now.

Forget whom, then forget the rule.

When to obey the rule

Mignon Fogarty makes a good point in this regard.

When you’re writing a cover letter to a potential employer, don’t end a sentence with a preposition. The person reading the letter could see it as an error.

If you are writing a letter of complaint, a thesis, or a college essay, it’s probably best to stay with more formal structures and avoid ending and starting sentences with prepositions.

So yes, there are times when it’s best to stick to the old rules.

There’s no rule now, so you can’t break it

I’m not a stickler, but when it’s quick, easy, and possible, I prefer to avoid prepositions at the end of a sentence.

It’s not about a rule but about writing the best that I can for my readers.

As an example, the following sentences are so easy to change.

This is what I’m writing about.

I’m writing about this. (Better)

We had dinner, then went to the theatre after.

We had dinner, and after, we went to the theatre. (Better)

It’s not something I want to get into.

I don’t want to get into something like that. (Better)

There’s no rule, but it never hurts to tighten your writing by avoiding an ending preposition when it’s easy to do.

Language is constantly changing, so many grammar rules and style recommendations come and go.

In this case, there’s definitely no longer any need to be concerned about a preposition at the end of a sentence in creative writing.

So there’s nothing to worry about.

But, if it’s quick and easy to rewrite a sentence, it’s sometimes a good idea, simply as a matter of style.