Skip to content
You are here:Home » Grammar » Is The Schwa Sound Perhaps The Cause Of Your Grammar Mistakes?
Grammar
Updated January 15, 2021 Derek Haines 4394 Views

It occurs in many words, unstressed syllables or to contract auxiliary verbs and prepositions.

The schwa sounds like “uh” in umbrella or under and in phonetics, it is represented by the schwa symbol of an upside-down /ə/.

If you look up a word in an English dictionary, the sound in the word that is schwa will be shown in the pronunciation, which uses the phonetic alphabet. For the word ago, it will be əˈɡəʊ.

We use this weak neutral vowel sound in approximately fifteen percent of all our utterances in English. That makes it one of the most common sounds we use when we speak.

An ode to the word Schwa

I’m retiring and meek,
And I always sound weak,
But in frequency counts – I’m the star!

The common short reduced vowel sound of the schwa can be taken by any unstressed vowel letter.

In most dialects, for example, the term schwa is applied to sounds found in the following words:

The a is schwa in adept.

The e is schwa in synthesis.

The i is schwa in decimal.

The o is schwa in harmony.

The u is schwa in medium.

The y is schwa in syringe.

The schwa sounds occur in many words and can replace more than one vowel and consonant.

Depending on different accents, the sound can also be a neutral vowel or even a stressed vowel as in the examples below.

It can also occur in stressed multi-syllable words such as in measure.

In phrases and sentences, the schwa is used to contract not only short vowels but also untressed articles, auxiliary verbs, unaccented syllables, stressed syllables, and prepositions.

It takes a lot of time.

How about a cup of tea?

What are you doing tonight?

What time will you arrive at Victoria Station?

I was going to tell you.

The leisure centre is closed for a private function.

The airport is not far from the capital city.

The book is about pronunciation.

You need to pay attention all the time.

It is a very thorough report.

The pronunciation and use of the schwa can vary between British and American English. In particular, after some consonant clusters such as in the word number.

It is this use of the schwa that can cause reading and spelling confusion for some who are new to writing for publication.

Transposing spoken English into correct written English cannot be accomplished by the reliance on how a phrase sounds.

I could have been a star.

When spoken, this phrase can take two common forms using the schwa.

I could of been a star.

I coulda been a star.

In all uses of past models, the common pronunciation forms do not reflect the correct grammatical form.

Therefore, it is not unusual to see the following common writing errors occur.

The common grammar errors in these three examples were famously used by Celine Dion in her song, Woulda, Coulda, Shoulda. 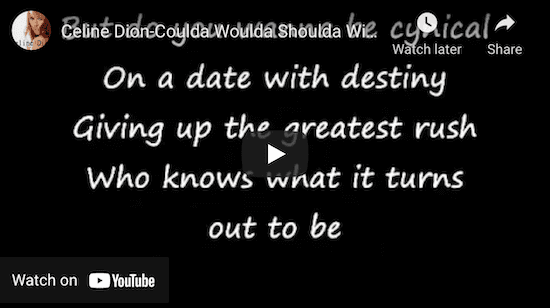 In so many common English language verb phrases, we use the schwa without thinking when we speak. For example:

Even if you speak very well, the application of spoken English words into writing can cause common grammatical mistakes.

If you look closely at this short text, you will see how frequently the schwa occurs in the phonetic translation.

This frequency makes it very easy to forget what the schwa is replacing and in turn, can lead to mistakes in writing.

Speak with the schwa but write with grammar

Lots of people make grammar mistakes when they write, including native speakers of English.

You don’t need to be an expert, but you can avoid very common grammatical errors by doing a quick check of all your writing before you post or publish.

You don’t need to dig too deep and worry about technical grammar such as coordinating conjunctions, independent clauses, a misplaced modifier, or a dangling modifier.

But you should be absolutely sure that you are using correct subject-verb agreement, the right possessive pronoun, and that you are not mixing past and present tenses.

Most importantly, every word or phrase you write has to be completed in its correct form and not diminished by common oral contractions and errors, such as “could of been and should of gone“.

The best way to be sure is to check with an online grammar checker.

You can use these correction tools for free, so it won’t cost you a cent to check that your writing is up to an acceptable standard.

They will highlight and refer to a specific error, one at a time, and then you can correct each one very easily.

Don’t rely on your ear and think that because it sounds right, it will be right in writing.

Always rely on good grammar for writing, and on phonetics, only for speaking

Learn How You Can Control Your Writing In The Future Tense

A Comma Before Because After A Negative Clause

2 thoughts on “Is The Schwa Sound Perhaps The Cause Of Your Grammar Mistakes?”

The Best Free Sites Where You Can Publish Poetry Online

This website uses cookies to improve your experience while you navigate through the website. Out of these, the cookies that are categorized as necessary are stored on your browser as they are essential for the working of basic functionalities of the website. We also use third-party cookies that help us analyze and understand how you use this website. These cookies will be stored in your browser only with your consent. You also have the option to opt-out of these cookies. But opting out of some of these cookies may affect your browsing experience.
Necessary Always Enabled
Necessary cookies are absolutely essential for the website to function properly. This category only includes cookies that ensures basic functionalities and security features of the website. These cookies do not store any personal information.
Functional
Functional cookies help to perform certain functionalities like sharing the content of the website on social media platforms, collect feedbacks, and other third-party features.
Performance
Performance cookies are used to understand and analyze the key performance indexes of the website which helps in delivering a better user experience for the visitors.
Analytics
Analytical cookies are used to understand how visitors interact with the website. These cookies help provide information on metrics the number of visitors, bounce rate, traffic source, etc.
Advertisement
Advertisement cookies are used to provide visitors with relevant ads and marketing campaigns. These cookies track visitors across websites and collect information to provide customized ads.
Others
Other uncategorized cookies are those that are being analyzed and have not been classified into a category as yet.
SAVE & ACCEPT
Posting....