This article remains online for reference value only.

Over the years, Createspace has helped many authors publish in paperback by using print on demand. It is a simple process that only requires a pdf file of the text and cover design.

The review process is fast, and a proof copy is available almost immediately. Once approved, author copies of the printed book can be ordered.

It always has been a terrific way to publish in print and Kindle as Createspace is also an Amazon company. Added to this is the fact that distribution to other retailers such as Barnes and Noble offered authors many advantages.

However, while most Createspace reviews are positive, there is almost always a mention of the many complaints about Createspace and its payment terms and especially by electronic fund transfer. (EFT)

EFT royalty payments to bank accounts were introduced by Createspace in 2012, but they were limited to only a very few countries.

Since the 2012 introduction, authors who live outside of the US, UK and a few European countries have had to suffer not only being paid by cheque but have also had to wait until their accrued royalty balances reached quite high balances of $100, £100 and Euro100.

On top of this, those authors who are paid by cheque then lost a percentage of their royalty, due to bank costs associated with clearing an international cheque from Createspace, which often amounts to between $5 and $10.

Meanwhile, for those fortunate to be living in the few countries where Createspace offered EFT royalty payments by bank deposit, there were no minimum payment thresholds and no additional bank fees for Amazon and expanded distribution sales. 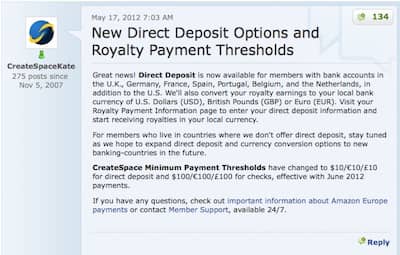 Despite years of complaints about this unfairness from authors around the world to Createspace customer service, nothing changed for three very long years.

Finally, in recent times, however, Createspace has announced that EFT royalty payments, and therefore no minimum payment thresholds, are now being made available to thirty-one additional countries.

While this is very welcome news for European authors, it is not so for many other countries.

Still noticeably missing from Createspace EFT royalty payments are major countries such as Australia, South Africa, and Canada along with probably many more.

While it is good news to hear that Createspace has acted, albeit, after three long years, there are still many self-publishing authors who are going to continue to suffer from exorbitant royalty thresholds and the costs associated with depositing a cheque.

One can only hope that Createspace will move more rapidly to make EFT royalty payments available to many more countries, and not wait another three long years to do so.

Update: Amazon KDP now offers similar paperback publishing services, so it might be worth considering changing over to KDP for Kindle and print. Especially, because Amazon KDP does pay by EFT to almost all countries. As Createspace is owned by Amazon, it seems that Createspace may well be phased out in the future.

Update 2: There is news speculation that Createspace will be closing down. This might be the right time to move your paperback POD self-publishing to KDP.

Update 3: We have published a new article explaining how to move your existing Createspace paperback titles to Amazon KDP.