Skip to content
You are here:Home » Grammar » People Or Persons And Peoples – How To Get Them Right
Grammar
Updated July 14, 2022 Derek Haines 73 Views 0 Comments

The choice to use people or persons in writing depends on the context.

In most cases, people is the accepted plural form of person.

But there are situations when it’s correct to use persons when talking about a specific number of individuals.

Peoples is a plural form of people but has limited use.

The difference between people and persons

From the early days of English literature, including Geoffrey Chaucer’s time, people was the word in common use as the plural form of person.

However, during the 18th and 19th centuries, the use of persons as a plural became more popular. 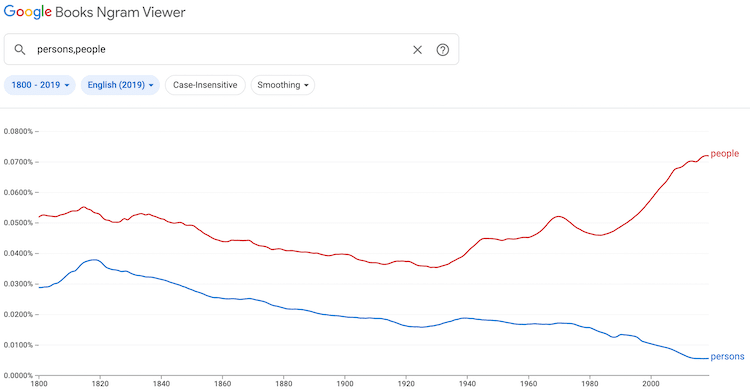 In part, it was somewhat of a class definition, as the following quote demonstrates.

As the term people is employed to designate the promiscuous multitude, it has acquired a certain meanness of acceptation which makes it less suitable than the word persons, when people of respectability are referred to.
English Synonymes Explained, George Crabb, 1818

The word slowly declined in use during the 20th century, but it was still in use without such a class connotation.

people: Where individual persons, or a number of such, are intended, this word should be discarded in favor of persons; as, “most persons are of this opinion.” People means persons collectively; as “People say.”
A Desk-Book of Errors in English, Frank H. Vizetelly, 1920

But as you can see from the graph above, from around 2000, people became the predominant plural for person.

Yet there are still uses for both words in modern English.

When to use people

In almost all cases and contexts, people is the correct word to use when referring to a group of individuals or an unknown number.

The number doesn’t matter, so you can use it from two to millions.

There were only two people ahead of me in the queue when the tickets sold out.

I’m not sure, but there must have been over 100,000 people at the protest march.

Of all the people to meet on my first day at my new job! Yes, my ex works in the same department.

I guess it might upset one or two people, but I’m happy with my decision.

You can check with your preferred style guide, but most now advise using people as the plural for person.

When to use persons

Deciding when to use persons instead of people is often because there is a clear legal context.

But there are more instances where the word is appropriate.

When police comment on a crime, the use of persons is quite typical.

The police are seeking information about three persons of interest.

We have a number of persons assisting us with our inquiries.

Any person or persons trespassing on this property may be prosecuted.

In contexts other than law enforcement, legal, or in contracts, persons might seem a little old-fashioned.

However, in some English-speaking countries, it may be in more common use.

Interestingly, I noticed when I was working in India that the word persons was used much more regularly than in the UK and this may well be the case for other countries where English is widely spoken. Amy Lightfoot – BBC World Service

When to use peoples

The only use for the word peoples is when referring to two or more nationalities or ethnic groups of people.

But when it is necessary to talk about two or more, we can use peoples.

The indigenous peoples of the world celebrate an annual International Day.

It is up to all the peoples of the world to hold their political leaders to account.

The peoples of the Pacific nations are fearful of the effects of climate change.

Twenty people attended the party, but nineteen left early. How many people remained?

It’s a silly old riddle for this vocabulary choice, but it proves the point.

The correct word choice is a person for singular and people for plural.

Selecting the right word or words is a writer’s job, but there are always confusing words you need to check.

But in this case, it’s pretty easy.

Related reading: Using they as a singular pronoun.