Skip to content
You are here:Home » Grammar » Obliged And Obligated Are Similar But Not Quite The Same
Grammar
Updated August 17, 2022 Derek Haines 69 Views 0 Comments

Obliged and obligated are similar in meaning.

However, there is a slight difference because obligated implies a sense of legal responsibility.

But obliged is more about being personally grateful, thankful, or in someone’s debt.

That’s why the two words are not always interchangeable.

Usage of obliged or obligated

Interestingly, obliged was in very common use in the 19th century but declined dramatically in the mid-20th century.

The reason is perhaps that there was a higher degree of politeness when using oblige and obliged in years gone by.

But because few of us live in times of noblesse and royalty now, the word has lost that sense. 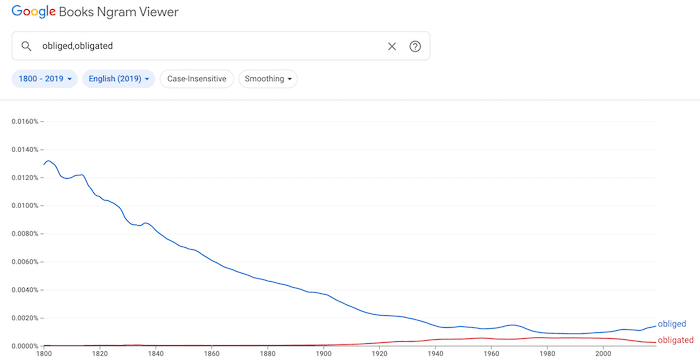 Obligated, on the other hand, is relatively new.

Some speculate that it is in more common use in the United States.

But the word has valid uses in all forms of English.

You can see from the graph that neither word is in frequent use now, but oblige is the most common choice.

As always, your word choice will depend on the context of your writing.

Let’s look at how to make the right choice.

When to use obliged

The verb oblige can be transitive or intransitive, meaning it can take an object or have no object.

Because of this, it’s very easy to use in any context.

Oblige has many meanings depending on the context of a sentence.

It can mean to require, compel, pressure, force, constrain or impel.

But other meanings are less about strict obligations. These include to indulge, accommodate, gratify, assist or serve.

Here are a few examples highlighting the different meanings.

If you have a few minutes to help me with the conclusion of my report, I’d be much obliged. (Grateful)

Let me know if you need a hand, and I’ll see if I can oblige. (Helpful)

I obliged all of my client’s demands, but it wasn’t always easy. (Accommodate)

I’m obliged by my employer to work in the office four days per week now. But I much prefer working from home. (Compelled)

When to use obligated

The verb obligate is transitive. So it usually requires an object but is often used in the passive voice.

It has some similar meanings to oblige. But only those that relate to a legal requirement, strict obligation, or bound by a contract.

That’s why it is not always interchangeable with oblige.

In the quote above by Elvis Presley, the use of obligated meant that he believed many people depended on him for their incomes and that he had legally enforcable contracts to perform.

When you use obligated, make sure it is in the context of something that is binding, enforceable, or a legal commitment.

The builders are obligated to complete construction within 12 months or face penalty clauses.

If you lease a new car, you are obligated to pay the residual value at the end of the contract.

The government wants to cancel the purchase agreement but is obligated to pay an enormous exit fee.

When you can use either obliged and obligated

In general, you can use obliged in any context.

It is easy to understand, and you won’t go wrong in any suitable context.

However, obligate has restricted uses.

You should take care to use it only when there is a clear legal context.

Does the noun obligation derive from oblige or obligate?

It’s an interesting question, and from my research, there doesn’t seem to be a clear-cut answer.

Dictionaries don’t seem to agree on which one is the derivative verb.

Here are a few examples.

Middle English (in the sense ‘formal promise’): via Old French from Latin obligatio(n-), from the verb obligare (see oblige).

The Collins dictionary notes this word origin, which links to the verb obligate.

But Merriam-Webster points to oblige.

History and Etymology for obligation
Middle English obligacioun, borrowed from Anglo-French obligacion, borrowed from Latin obligātiōn-, obligātiō, from obligāre “to tie up, restrain by tying, place under a legal or moral constraint” + -tiōn- -tiō, suffix of verbal action — more at OBLIGE

In my opinion, you can use the noun obligation in the sense of both verbs.

Perhaps it’s the sound of the hard G in obligate and obligation that links them together more easily than the soft G sound in oblige.

But that’s only my thinking, so it is certainly open to argument, depending on your source.

You are not going to use obliged or obligated very often in your writing.

But when you do, you have a choice.

In most situations, the verb to oblige and the noun obligation are probably the most appropriate words to use.

But if you are sure there is a contractual or legal obligation, you could use obligate.

It’s more of a vocabulary choice rather than a strict grammar point like past and passed.

As long as you know both meanings, you’ll make the right choice every time.

Related reading: Biweekly And Bimonthly Are Very Confusing For Readers