Learning how to change passive sentences to active is a skill all writers need. In most instances, all you need to do is move the subject before the verb.

In a passive sentence, there is often the operator word, by before the object. But without one, it can be unclear who or what performs the action.

But in the active voice, it reads much better and is more concise. Tom Smith wrote the book in 1972.

If you are new to writing, you probably use a writing or grammar checker to help you.

It’s a great way to learn and polish your writing skills.

Many of these apps highlight passive voice sentences for you but don’t give you guidance on how to change them to active.

You might try searching for a free passive to active voice converter online to make it easy.

But unfortunately, I have never found one that works.

However, if you use Prowritingaid, it’s the only app I know of that offers a one-click change from passive to active.

All you need to do is to mouse over the passive phrase, and the app gives you choices to click and change your sentence.

But if you don’t have the app, you can quickly change most sentences you write in passive to active voice once you learn how to do it.

Anytime you see the verb to be in any tense, followed by a past participle and perhaps using the operator by, it is a passive voice structure.

Look at these typical examples. 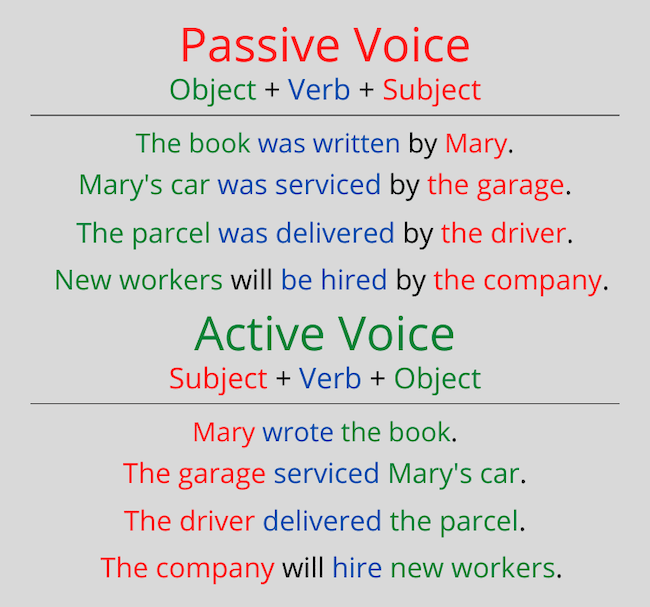 All you need to do is move the subject of the sentence to the beginning before the verb.

In an active sentence, it is always the subject at the beginning of the sentence that performs the action of the verb.

Passive examples without an operator

However, some passive sentences don’t have an operator. In these cases, you need to be a little creative and include the missing operator as the subject.

The renovations were completed in three months.

It is recommended that you take vitamin C when you have a cold.

I was told that my car needed a new battery.

You could rewrite sentences like this by adding a logical subject to turn these examples into an active voice.

The builders completed the renovations in three months.

Many doctors recommend that you take vitamin C when you have a cold.

The mechanic told me that my car needed a new battery.

Changing passive sentences to active ones is almost always possible.

When to use passive voice

There are some situations where it is not logical to change to an active voice.

It is usually because the actor is unclear, it is a general truth, or it is awkward to change.

It would be unwieldy to write this sentence in the active voice using a mother as the subject.

The police believe he was murdered.

All you could do here is say that a murderer murdered him. But it is repetitive and cumbersome.

Some rules are made to be broken.

This is a general truth, and we don’t know who first said it.

In instances like the ones above, it’s best to use passive voice.

The passive with the verb to be is easy to spot and fix. But you also need to keep an eye out for the causative passive. 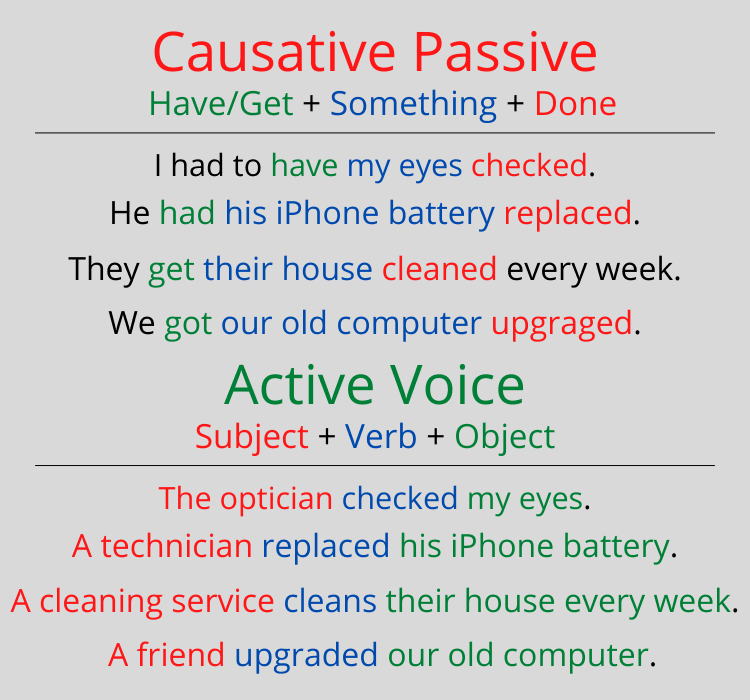 When we use the causative passive, it is possible to add an operator.

In the example above, you could say we got our old computer upgraded by a friend.

But the operator in this phrase might be redundant. He had his iPhone battery replaced by a technician.

When you want to change passive sentences to active from the causative form, you always need to decide which form works best.

Sometimes it’s more logical to use the causative because it is obvious who performs the action.

In the example, they get their house cleaned every week; it’s clear that a cleaner performs the action. Using the active form would seem repetitive.

When to change passive sentences to active

There’s no golden rule to follow. However, the overuse of passive sentences will definitely weaken your writing.

As long as you can recognize it and change the voice, you can reduce your use considerably.

In general, though, you can usually change most passive sentences to active quite easily. It will improve your writing clarity and also make it more concise.

But in the case of the causative forms, you will need to use your judgment as to when it’s best to change.

In either case, when you see that there is an action but no actor, it makes the sentence somewhat abstract.

For fiction writers, yes, it’s always best to use active voice as much as possible to make sure your charters perform all the action.

The same applies to article and blog post writing. An active voice is always preferable and more meaningful for readers.

But in business, technical and academic writing, there is more scope to use the passive voice. It is usually used to indicate general truths and understandings or to avoid citing responsibility.

If you want to check your passive use, you can always use the Hemingway app. It’s probably the most popular free app for this purpose.

But there are plenty of other apps to check for passive voice.

There are a lot of skills involved in writing well, and it takes time to develop them all.

But for me, the number one skill a writer needs is to be able to recognize the passive voice and then be able to change it to the active voice.

Once you know how to do it, it will become a great new writing habit and skill for you to use.

The biggest problem with passive sentences is that they are usually longer, say very little, and can bore a reader if there is too much of it.

Every writer needs to decide how much passive to use, but the answer is almost always as little as possible.

The Best Free Sites Where You Can Publish Poetry Online