Skip to content
You are here:Home » Grammar » What Is The Passive Voice And How You Can Stop Using It By Habit
Grammar
Updated October 14, 2022 Derek Haines 7298 Views

What is the easiest way to improve your writing? Learn how to stop using passive voice.

When I edit or proofread a text or manuscript, one of the common corrections I have to make is to turn causative and passive forms into active sentences.

Yes, I use passive resistance against the passive tense.

It is almost always better to use the active voice. It clarifies who or what is performing the action of the verb on the object.

How to stop using passive voice in your writing

Using the active voice allows a writer to describe people, places, things, and actions in much more detail.

A story or an article resonates better.

A reader will have a better idea of what, when, where, who, how, and why something occurred.

When you use active voice sentences, the subject performs the action of the verb.

It’s quite cold and devoid of information or detail.

This is because the grammatical subject of the sentence does not perform the action.

But to avoid using these forms, you first need to know how to find passive voice constructions.

You can use any passive voice checker if you are not sure.

Then you need to know how to stop using passive voice sentences and change them into more detailed active sentences.

1. The Passive vs the Active Form

Here is a very basic example of a simple sentence in active and passive forms.

Active: Our manager canceled the meeting because of the train strike.

Passive: The meeting was canceled due to a train strike.

The use of due to is common in passive forms, but because it is more informal and suits the active form better.

In general, the passive form is far less informative than the active form. This is why it is so important to learn how to stop using passive voice and why active voice is the preferred style in good communicative writing.

The basic form of the passive is the verb to be + past participle in all tenses.

However, we use this exact same structure with adjectives too, so it can cause confusion. For example:

Active: He was confused.  Meaning he wasn’t sure or couldn’t make up his own mind.

Active: They were relaxed. They were in a state of relaxation.

Passive: They were relaxed (by something or someone). The music helped them to relax.

The way to differentiate between the two is to understand if there is or can be an operator.

In the passive form, the preposition by indicates that in the passive voice, the subject receives the action from the operator.

The verb to be + past participle + (by) operator

If it is the adjective form, there is no operator because it is describing the subject of the sentence.

The use of the passive can also create awkward sentences, especially when used with a prepositional phrase.

Active: Martin abided by the decision.

Passive: The decision was abided by.

Active: The burglar broke into the bank.

Passive: The bank was broken into.

The sentences above show why you should avoid the passive when there are dependent prepositions.

When the form of the verb is a phrasal verb with one or sometimes two particles, it can really become ridiculous.

Here is a grammatically perfect example of the passive that is cumbersome.

Active: David and Roger got down to business.

Passive. Business was got down to.

The clarity in writing comes from being precise about who performs the action, which can then be described in far more detail.

To achieve this, it is best to start a sentence with a verb phrase and avoid using an inanimate noun as the subject of a sentence.

In the example above, choosing between active or passive voice is easy.

Writing about the burglar would be much more interesting than writing in vague, boring terms about a bank.

The passive with modal verbs

Modal verbs, including should, can, or must can, often take the passive form.

The way to identify this is to check if it is clear that the subject of the sentence is performing the action.

Here is an example of the should passive voice.

Passive: It’s under warranty, so your computer should be repaired.

Active: It’s under warranty, so Apple should repair your computer.

Passive: Your passport can be renewed overseas.

Active: You can renew your passport overseas.

Passive: A car must be serviced once a year.

Active: You must service your car once a year.

Passive: Your phone should have been fixed for free.

Active: The shop should have fixed your phone for free.

2. What Is Passive Voice In The Causative Form?

Causative forms are similar to the passive voice in that there is usually an invisible operator.

There are two causative structures.

Here are some causative examples, including some using auxiliary verbs.

Mary has her hair cut every two months.

He had his computer replaced under guarantee.

I am having my teeth cleaned on Monday.

She’s getting her hair done before the wedding.

As with the passive, an operator can be added, but it is rare to do so.

Mary has her hair cut every two months by her hairstylist.

He had his computer replaced under guarantee by Apple.

The difference between have and get + object – past participle

We use have when something is arranged for someone, and with get, it expresses the idea that the subject is in some way involved.

I am having my teeth cleaned on Monday.

This says that someone else, and in this case, the dentist, is doing everything.

It indicates that Joe was perhaps in some way involved.

Perhaps by taking his car to the garage and waiting there or possibly even participating in the service.

We often use the causative when the subject pays someone to perform an action.

Anytime you notice that you are using the causative verb or form of verbs, think about trying to express it in another way.

By doing this, you can remove the simple use of cause something and rewrite it with more descriptive elements.

Mary has her hair cut every two months.

Mary goes to her hairdresser every two months because she likes to keep her hair very short.

Sometimes it seems quicker and easier to use the passive or causative.

However, it usually lacks detail or explanation.

It is much better to rewrite these sentences in the active form and add more compelling detail.

You can use almost any good grammar checker to do this check.

The first thing I do is look for passive voice sentences and make sure that I replace every one that is possible to change. 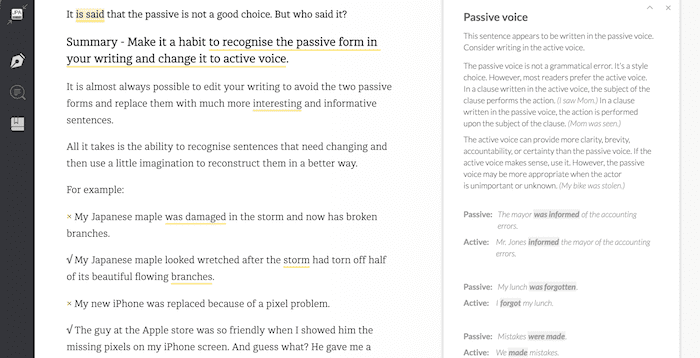 Learning how to stop using passive voice is quite easy.

Then you can make it a habit to recognize the passive form in your writing and change it to an active voice.

It is almost always possible to edit your writing to avoid the two passive forms.

You can then replace them with much more exciting and informative sentences.

All it takes is the ability to recognize sentences that need changing.

Then use a little imagination to reconstruct them in a much better way. Adding a transitive verb often helps.

Put simply, make sure that the subject of the sentence is performing the action of the verb.

× My Japanese maple was damaged in the storm and now has broken branches.

√ My Japanese maple looked wretched after the storm had torn off half of its beautiful flowing branches.

× My new iPhone was replaced because of a pixel problem.

√ The guy at the Apple Store was so friendly when I showed him the missing pixels on my iPhone screen. And guess what? He gave me a brand new phone on the spot and didn’t even ask for my receipt.

× I have been told that coffee is good for you.

√ I read an article in Popular Science a few days ago that explained all about a huge research project that proves that coffee is good for you.

It is said that the passive voice is not a good choice. But who said it?

To round off this article, here are a few of my favorite quotes about why you should avoid passive voice in all forms of writing.

“The passive voice invariably comes across as pontificating, patronizing, talking down. It sounds insincere, even dishonest, and it makes the reader uncomfortable, not trusting, though usually the reader cannot put her finger on why.”
Henriette Anne Klauser, author of Writing on Both Sides of the Brain

“[The active voice is the] vigorous voice, unashamed to say whodunit. Passive voice is preferred by the weak, the cowardly, ashamed to name the fink who told them what they are evasively telling you.”
John Bremner, late professor of journalism at the University of Kansas and author of Words on Words

“Reduced to its essence, a good English sentence is a statement that an agent (the subject of the sentence) performed an action (the verb) upon something (the object).”
John Ciardi, English dramatist, actor, author

Related reading: Never End A Sentence With A Preposition – A Rule To Follow?