What is the rule of three in writing?

The rule of three uses the basis that items that come in groups of three are more memorable than other numbers.

Literature, movies, and many forms of creative writing, and advertising often use the rule. We all know set expressions like stop, look and listen.

It is the ability to easily remember things that come in threes that makes the rule of three in writing so powerful.

A group of three is effective in writing because it presents information in a memorable form for readers.

This fact helps make a message or concept more memorable for readers.

When we create patterns or sets, three is the smallest possible number.

If you only use only two, such as black and white, it’s a pair and not a pattern.

Whereas red, white, and blue form a pattern.

But three is also the basis of other things such as three-act plays, three main plot points, or three main characters.

In comedy, setup, anticipation, and punch line is a common structure.

In general, things presented in threes have the ability to draw attention to something with simplicity but completeness.

Let’s look at how the rule works in practice.

You only need to think back to your childhood to recall the importance of three.

Stories such as Three Blind Mice, The Three Musketeers, Three Little Pigs, and Goldilocks and the Three Bears are still favorites with children.

You learned expressions like, on your mark, get set, go and hip, hip, hooray.

Superman gave you; it’s a bird, it’s a plane, it’s Superman and Truth, Justice, and the American Way.

Advertising taught you to remember, a Mars a day helps you work, rest, and play.

You can probably recite many expressions like these. That is why the number three is so powerful.

The number three is everywhere

Writers of all forms have used this formula throughout history. It’s as easy as A, B, C.

Here are some classic examples.

In the United States Declaration of Independence, the line, Life, Liberty, and the pursuit of Happiness was drafted by Thomas Jefferson.

In the bible, there is the Holy Trinity. The Father, the Son, and the Holy Spirit.

Another example is Friends, Romans, Countrymen, by William Shakespeare in Julius Caesar.

Never before in the field of human conflict was so much owed by so many, to so few, by Sir Winston Churchill.

There are three kinds of lies: lies, damned lies, and statistics by Benjamin Disraeli.

Other forms of the structure are repetition and alliteration.

There is also a hendiatris.

It is a figure of speech that uses three successive words to express a principal idea.

Some well-known examples include; Veni, Vidi, Vici, from Julius Caesar.

And who doesn’t know, wine, women, and song?

In theater and Hollywood films, the three-act structure is very common.

It comprises the Setup, the Confrontation, and the Resolution.

One, two, three, then stop

When you present one item, you are giving a powerful signal. Think here of Stop War, Fake News, and Me Too.

With two, you create contrast or comparison. It’s me or you, it never rains, it pours, and, I want to see it in black and white.

When there are three items, it can be for completeness. But it can also be for emphasis or surprise.

The rule of three SAP rule in comedy 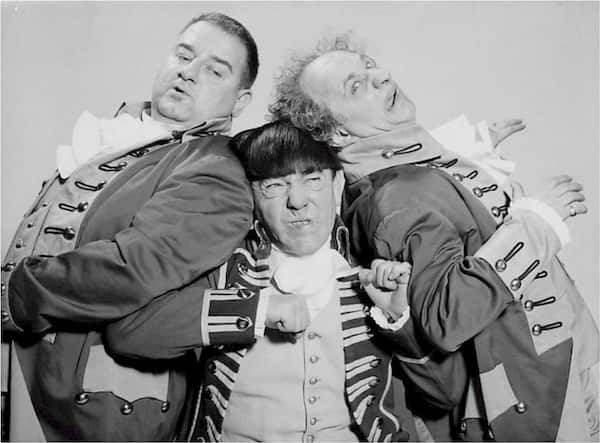 In comedy, it is defined as SAP. It stands for set-up, anticipation, and punch line.

A good example is this one by Lewis Carroll.  The rule is jam tomorrow, and jam yesterday, but never jam today.

Another example of how it can be used in comedy is from The Dick Van Dyke Show.

Can I get you anything? Cup of coffee? Doughnut? Toupee?

There are many others including, mad, bad, and dangerous to know.

Seen it, done it, bought the T-shirt and, stand up, speak up and shut up.

Wendy Liebman said; I got my first bikini. It’s a three-piece: It’s a top, a bottom, and a blindfold for you.

How to use the rule of three in your writing

All writers know the cliché that every good story needs a beginning, a middle, and an end.

But it is more important to think about your message. What do you want your readers to remember clearly?

You don’t need to use only idioms and expressions to follow the rule.

When you are writing an article, arrange your ideas or recommendations in groups of three. Bullet points are a great way to achieve this.

But you can’t have one or two bullet points. Four or more become confusing. Three is the sweet spot.

In your conclusion or summary, highlight your three main points.

An expression that relates to public speaking can also apply to good article writing.

When you are writing fiction, too many characters can often confuse and frustrate readers.

You have your protagonist, of course. But you should keep the other main characters to two. Perhaps the antagonist and the romantic interest.

What about the locations in your novel? Are there too many for a reader to remember?

When you think about the rule of three in writing, it can clarify your thinking and concentrate your ideas down to the best ones.

However, if you have six terrific ideas you want to express, break them up into two groups.

Brain Clark wrote an excellent piece for content writers. He says that you need to address who, what and how.

It is a good example of three-part thinking when you are preparing your first draft.

Yes, we all know that writing is easy. It only involves blood, toil, tears, and sweat.

Or should that only be blood, sweat, and tears?

People love things in threes because they can remember them.

Making a long list in an article or developing a story in multiple and confusing layers might seem intellectual.

But it is a recipe for losing attention.

It’s not about intellect, but about the basics of human memory and attention span.

How do you remember telephone numbers? You do so by breaking it down into little groups of two or three numbers.

The same logic should apply to your writing. When you want to make it memorable, chunk it into ones, twos, and threes. But no more.

In his book Writing Tools: 50 Essential Strategies for Every Writer, Roy Peter Clark says this about the rule of three.

… the “encompassing” magic of number three … in our language or culture, three provides a sense of the whole …

… in the anti-math of writing, the number three is greater than four. The mojo of three offers a greater sense of completeness than four or more. …

Use one for power. Two for comparison, and contrast. Use three for completeness, wholeness, and roundness.

These are three wise pieces of advice for all writers.

Related reading: Palindromes Are Fun, Whichever Way You Look At Them