Skip to content
You are here:Home » Grammar » Backward Or Backwards And Other Direction Adverbs With An S
Grammar
Updated June 28, 2022 Derek Haines 17 Views 0 Comments

Which spelling is correct? Is it backward or backwards?

The good news is that both of them are perfectly correct for this adverb.

But it depends on whether you write in US or British English.

For US writers, there is no S. But for UK and some other national varieties of English, there is an S.

When to use backward or backwards

Generally, American writers mostly use the adverb backward, without an S.

He wasn’t sure the dog was friendly, so he took a few steps backward.

For British and perhaps writers of other varieties of English, it is common to add the S.

Ronald glanced backwards over his shoulder to check if he was being followed.

However, it only applies to the adverb.

When it is an adjective, there is no S in any form of English.

He was courageous and known for never taking a backward step.

These general rules are easy to remember.

But as with all things in English grammar, it’s not always so simple.

Language is constantly changing, and so too are its uses.

The evolution of backward and backwards

The general rules might be fine in theory. But in practice, writers are making their own decisions.

According to Google Books NGram Viewer data, US writers are more likely to use no S. But not all of them. 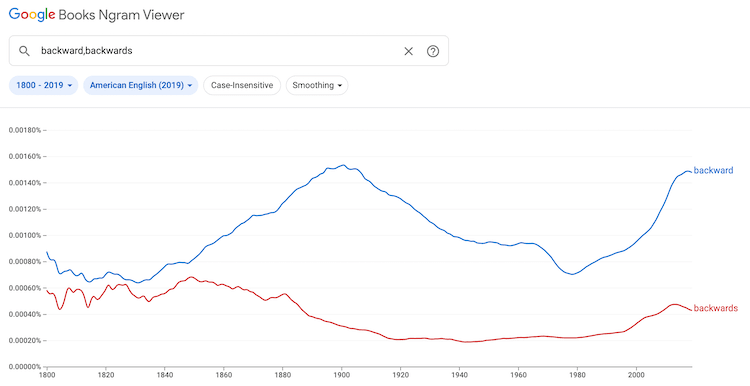 However, for British writers, the same graph tells a totally different story in regard to usage. 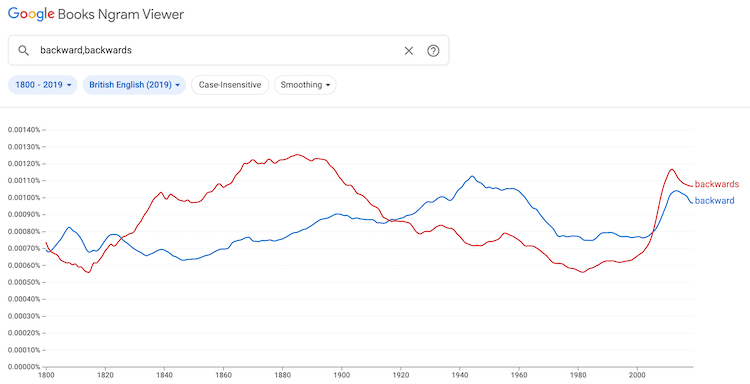 Quite remarkably, the adverb is now more commonly used with an S in British English.

So while both are correct, it is becoming far less of a US and British English rule.

But one rule writers can’t ignore is being consistent with whichever spelling you choose to use.

The S and other directional adverbs

There are many adverbs of direction that can take an S.

For example, downward, upward, forward, toward, homeward, inward, and outward.

Collins Dictionary lists forwards and forward but says that with an S, it is the British use.

If you check almost any dictionary, you will usually see entries for both adverb forms.

Even some archaic adverbs, including heavenward, hitherward, and thitherward can take the optional S.

You would rarely if ever, use these words. But it never hurts to be aware of them and know they are there waiting for you.

Once you decide on an S or no S, stick with it.

But watch out for expressions using two adverbs.

He sat on the veranda in his rocking chair, slowly rocking backward and forwards. Incorrect

He sat on the veranda in his rocking chair, slowly rocking backward and forward. (or backwards and forwards) Correct

It’s not uncommon for grammar checkers to miss this error.

In fact, when I checked, Grammarly didn’t highlight the error in the first sentence.

But beware of the adjectives

Most directional adverbs have an adjective form.

In these cases, there is never an S at the end of the word.

As a general rule, adjectives in English are never plural, so it follows this rule.

But yes, I’m sure you are immediately thinking of a sports car or a clothes dryer.

There’s an upward trend in our June sales results.

Jane is really in a downward spiral after losing her job.

Mike is so confident and is never backward in coming forward.

It’s not so long ago that ending a sentence with a preposition was a no-no. But now it’s perfectly okay.

On the opposite end, it’s also acceptable now to start a sentence with a preposition.

So while backwards and backward were once defined as either US or British English, it is no longer the case.

You can use either form no matter what English you use.

You only need to make sure that you are consistent.

How Do You Make Do And Don’t Plural When Used In Writing?

Further vs Farther – How Are These Two Words Different?

Hazard A Guess Or Has At A Guess? Which One Is Correct?

When Is It Necessary To Use A Comma Before Or After But?

How To Add Your Text To A Picture, Photo or Image For Free 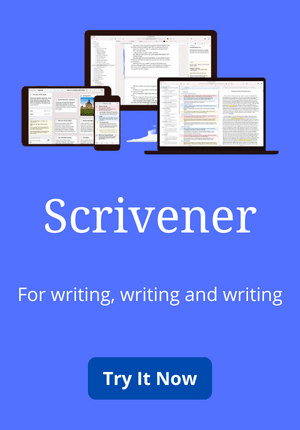 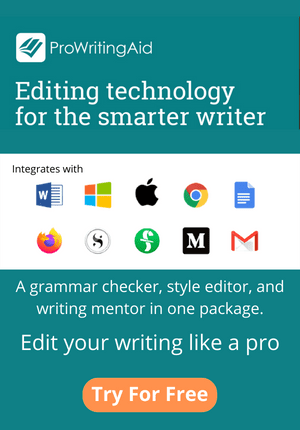