Does this look like a candidate for banned book covers to you?

Well, it is. Read on to understand why.

If you publish with Amazon KDP, one of the benefits is that you have access to Amazon pay-per-click advertising.

I have been experimenting with this program, and although it is a bit clunky and clearly still in development, I have been relatively happy.

There were a few bugs

One of the biggest problems was that author names were in reverse order. But I notice this glitch has now been rectified.

But I got an odd surprise from Amazon advertising. They told me that my book cover violated their ad guideline policies.

Okay, after exchanging messages with Amazon Ads, they made their point that under their guidelines, the three most commonly rejected cover image themes were firearms and weapons, blood and violence, and provocative images.

Well, had I read the guidelines, which, of course, are not that easy to find, I should have been aware of the problem with my book cover and its suitability for Amazon advertising.

Except that Amazon previously approved my book cover, and it ran quite happily for a few weeks. 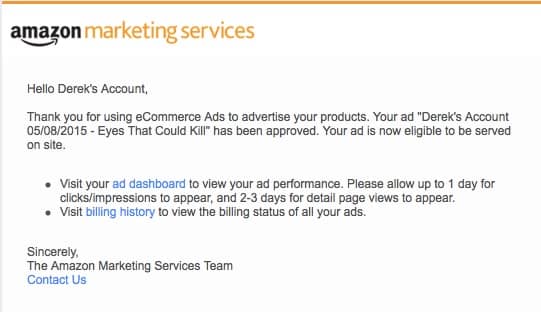 But I made a silly mistake, which in part was due to an oddity on the KDP Ad dashboard.

Instead of clicking ‘pause‘ to stop my ad running for a couple of days prior to a free promotion I had planned, I accidentally clicked ‘terminate.‘

Once you click, there is no way to recover an ad. It is really not a smart option, as there is no recovery or duplicate option.

I had to set up the ad all over again and wait for a new approval.

This was the reply to the exact same ad that had been previously approved three weeks earlier. 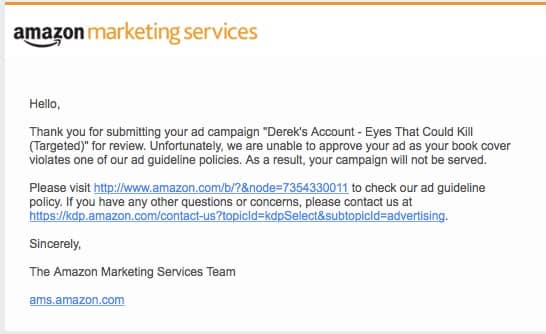 Of course, I pointed out this fact in my messages to Amazon.

I asked why my approved ad was now unapproved, but there was no arguing with them.

My cover was not in conformity with Amazon guidelines, etc., etc. That Amazon previously approved it was of no consequence.

End of story, end of the ad. But I discovered the issue of banned book covers on Amazon.

If you are planning to use KDP pay-per-click ads, you might have some ups and downs, surprises, and inconsistencies.

But here’s a little footnote, though.

I had the same book cover running quite happily on Facebook ads. Facebook had no issue with the cover image at all.

On top of that, Facebook ads average out to be about half the cost per click when compared to Amazon.

So I guess, in a strange roundabout way, Amazon saved me some money.