Skip to content
You are here:Home » Writing » What Is Point Of View In Story Writing And How You Choose
Writing
Updated October 14, 2022 Derek Haines 7845 Views

Point of view in story writing is one of the first elements you need to know how to use as an author.

Your choice of point of view (POV) decides who is telling your story to whom.

All writing uses one of the choices, but very often without any thought.

But if you are writing a book or short story, then deciding on your POV is a vital part of your planning.

Story writing starts with deciding on your point of view

Leaping straight into writing a novel without any planning or framework beforehand will often lead to a confused or convoluted plot.

An excellent way to see if an idea is worth pursuing is to think about writing a short story.

By doing so, you can experiment with the story structure and your characters.

Depending on the type of story, you could make decisions about character names, settings, and a timeline of events.

Try to create a story in miniature that you can develop and extend later into a novel.

Don’t worry about elements that will come much further down the track if you extend your story into a novel.

Foreshadowing, story arcs, rising action, and mood can all wait.

When you have solidified your idea and want to start turning it into a novel, it is time to make one of your most important decisions.

Who is telling your story?

Let’s look at the choices you have.

Point of view in story writing, and which one will you use? 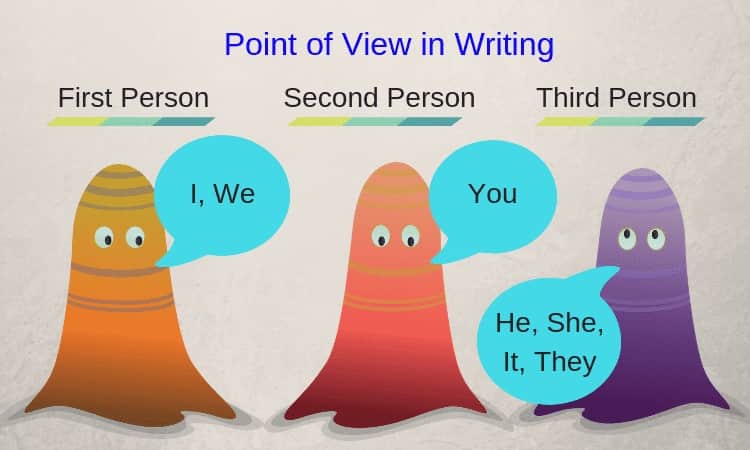 Point of view (POV) is the perspective or angle a writer uses to let readers hear and see what happens and indicate who is narrating a story.

Other uses are to explain or express the emotions of the author and their characters.

The choice of point of view is how a writer wishes to convey the story’s action to readers.

There are three basic types of point of view.

The first person, second person, and third person, of which there are two types.

Each one uses different pronouns with all actions and dialogue.

Let’s look at each POV in detail.

The first person point of view

The first person narrative speaks from the writer’s perspective.

This makes the author the main character in the story.

It is naturally a biased view the narrator holds and only expresses the opinions of the author.

It uses the first person pronouns of I, me, my, and mine.

It was my mother who introduced me to reading.

There was never a time that I believed I would be successful.

She sat there, across the table, staring at me, and I couldn’t think of a word to say to her.

This POV is generally used for memoirs and autobiographies.

However, it is also used on occasions in crime and detective fiction when the story is being told from the protagonist’s viewpoint, who is usually a cop or detective.

Self-help or personal development books also use the first person to explain the writer’s problem and how they found a solution.

In fiction, the danger is that a story written in the first person can lack an objective point of view, so it has limited uses.

However, some writers, such as Salman Rushdie, mix the first and third person, as he did in his book, Midnight’s Children.

The first person plural view is a rarity. It uses the pronouns we and our.

We spent the day by the beach, not far from our bungalow.

The only possible use for this view could perhaps be for a travelogue involving two people.

The second person point of view

The second person is the least used POV, particularly in fiction.

It talks about an unknown character, who is, in fact, the reader.

The second person uses pronouns you, your, and yours.

It is why you should think about your diet.

You won’t stand a chance unless you prepare for the interview.

You could see she had been drinking as she struggled to her feet.

I am sure you have thought about moving, but you would miss your friends, wouldn’t you?

The primary use for this POV is for giving advice, so it is more suited to self-help books and articles.

It is rarely used in fiction. But Bright Lights, Big City by Jay McInerney is a rare example.

It is a very difficult POV to use in fiction, so it is certainly not one for new writers.

The third-person point of view

The third person is the most used in fiction, and it has two forms, but they both use the same pronouns.

It generally uses the past tenses, and some call it the storytelling tense.

It uses the third person pronouns of he, she, and they. The object and possessive forms are her, hers, him, his, them, their, and theirs.

There was the threat of rain, but she decided to take her chances.

There were police officers everywhere, but the bank robbers liked their chances of escaping because they had two hostages.

“I don’t understand what’s going on,” he said and then filled his glass.

She said that she had told them, but he didn’t believe her.

In the limited form of the third person, it is the narrator telling the story and writes from the perspective of having restricted access to the thoughts of the characters or the character’s feelings.

Sometimes, however, it can mean that the author limits the narration to the experiences and thoughts of only one character.

A good example of limited third-person writing is Harry Potter. J. K. Rowling only expresses the thoughts of Harry in her series of books.

The difficulty with this POV is in balancing the amount of information.

But an overdose of omniscient narration can divert attention away from the story with too much attention given to the thoughts of all the characters.

It is much better to let the characters show the story through their actions than for the narrator to tell everything about how they think and feel.

A variation on all points of view is one of unreliable narrators.

However, the third person POV uses it mostly.

As the name implies, the reader can’t trust the narrator.

There are many variations, but the narrator is sometimes lying, hiding the truth, misleading, or insane.

It is a literary device where the details are fuzzy. It is a tool to confuse the reader or to set up a major plot twist.

The other defining feature is that the writer and narrator are not one and the same person, as is the case with limited POV.

As a writing technique, it is one that would be best attempted by experienced writers.

What are points of view in writing? They say who is telling your story.

There is one golden rule with point of view. Select one and stick with it.

Swapping from one POV to another in a story is not easy to follow, and it stands a very good chance of confusing readers.

Sometimes called head-hopping, it is when a writer suddenly and without good reason changes the viewpoint.

When a book gets bad reviews, readers often use vague terms to say why they didn’t like a book.

Phrases like, it just didn’t grab me, the characters lacked any depth, or I couldn’t really understand what was going on are telltale signs of a problem with either the wrong choice of point of view or a lack of consistency.

For new writers, understanding the point of view in story writing is the first step in learning how to write and write well.

Related reading: How Many Words In A Novel? It Usually Depends On Your Genre