Skip to content
You are here:Home » Writing » Wreaked Havoc And Wrought Havoc – Are Both Of Them Correct?
Writing
Updated July 19, 2022 Derek Haines 56 Views 0 Comments

Is it wreaked havoc or wrought havoc?

At first glance, I thought both were correct, but that wrought sounded much better.

Like you, perhaps, I thought wrought was the simple past verb for wreak, as with bring and brought or teach and taught.

But after hitting the dictionaries, I discovered I was wrong as there is far more to these two words than meets the eye.

What’s the difference between wreaked havoc or wrought havoc?

In general use, most people would understand both expressions to mean the same thing.

That is, to create a large amount of damage or harm.

Hence the common collocation of both words with havoc, meaning widespread destruction, great confusion, or disorder.

But where things get weird is that wrought is an archaic, simple past form for the verb WORK.

So wreak, meaning to cause or inflict destruction or harm, is fine. But how did work manage its way into the expression?

Well, as always, with English and dictionary definitions, it’s about usage. 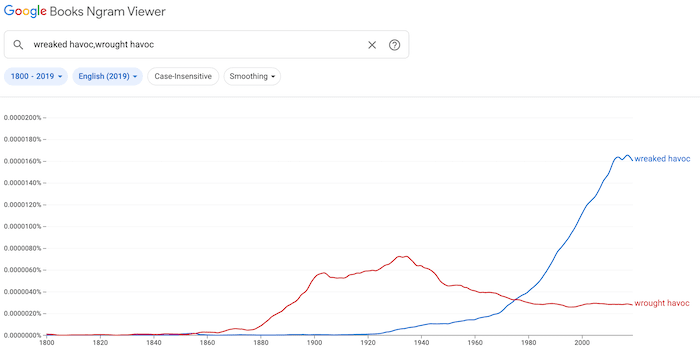 As you can see, wrought was in use initially with the expression from around 1860 and gained popularity.

It was only in the 1970s that the word wreaked became more popular.

Until then, it was more common to attach the meaning of work to havoc with wrought.

It seems that up until the early 20th century, work and worked were more often associated with havoc.

But even since then, work still appears in print.

Here are a few examples.

Great Loss In Tennessee.; The Tornado Worked Havoc About The Town Of Gallatin. New York Times, 1890

The least change in the way things are done can work havoc in supply regions. Cities and the Wealth of Nations, Jane Jacobs, 1984

The origins of and use of wrought

Merriam-Webster gives this explanation of the origins of the word.

Wrought derives from Middle English worken, the past participle of our very familiar verb work, following similar verb patterns still in use today (caught, bought, taught). Nowadays, however, we simply use the standard –ed suffix for work.

Wrought might be best known from the line “What hath God wrought,” which appears in the Book of Numbers (KJV 23:18)

Today, we still say wrought iron when referring to types of fences, gates, and balconies.

It means worked iron that is hammered into shape, as opposed to cast iron, which uses a mold.

Because wrought means worked, it follows that it collocates with havoc.

It’s interesting that the New York Times and the Guardian continue to use it quite often.

Long before Connie and Diane wrought havoc in the East Richard W. Carver of Cleveland, Ohio, invented a house which he is convinced will not be swept away by any flood. 1955

Tribal land claims have wrought havoc across the Northeast for decades, … 2005

It was left to those with long farming careers and equally long memories to recall the last time the disease had wrought havoc in the area. 2001

Cruise ship operator Carnival said yesterday it expected the hurricane that wrought havoc in Florida over the weekend would cost it up to £18m. 2004

Even with the health protocols, the coronavirus has wrought havoc. 2022

Yes, there is a slight difference in meaning between wrought and wreaked. But they are close enough to both be correct when referring to havoc.

Havoc has its origins in the Norman invasion of Britain as a war cry or order to plunder and pillage.

It derives from the French word havot, meaning to plunder.

But it wasn’t until the 15th century that it appeared in print.

The most quoted example is Shakespeare’s famous line from Julius Caesar.

In this use, it is a war cry and follows the origin of the word.

But later, other verbs became associated with the word.

The only verb to avoid is wreck havoc. You sometimes see it, but it is incorrect.

It’s because it sounds similar to wreak.

Words that sound the same, such as bare and bear and peaked and piqued, are other examples of how this type of error is so easy to make.

Should you use wreaked havoc or wrought havoc?

I think the answer is that it’s up to you to choose.

For me, I might tend to favor wrought havoc because I prefer the way it sounds.

It’s not as harsh as the consonants in wreaked.

But in writing, I don’t suppose that the pronunciation sound makes any difference for a reader.

However, I doubt I would ever use work havoc. Even if it is also perfectly correct.

Related reading: Obliged And Obligated Are Similar But Not Quite The Same