Do you need to change your Facebook marketing for books?

If you are an author or content writer and you are promoting your books or articles with a Facebook business page, it is certainly time for a rethink.

Social media marketing always needs some tweaking, but in the case of Facebook pages, so much has changed in recent times.

The most significant issues, of course, are trust and respect for privacy.

In This Article Hide
Facebook is changing
Facebook is still Facebook, but …
What can you do to adapt?
Can you still leverage Facebook to promote your books and blogs?
1. Expand your number of friends.
2. Build your Page Likes and followers.
3. Use very fine ad targeting.
4. Add a Facebook shop.
5. Think about times to post.
6. Write blog posts for Facebook.
7. Fewer book posts, more you.
Summary

We all read the news about the Cambridge Analytica breach of 87 million Facebook profiles.

Almost every Facebook user has reconsidered their marketing efforts and how they now might use or not use the platform for brand awareness.

The consequence was a sudden nosedive in share value.

In the United States, the reaction to the loss of trust in how Facebook managed user data was even more telling.

An article from Forbes, which quotes Pew Research data, reveals some startling statistics about user behavior in the past 12 months.

26% of all respondents deleted the Facebook app from their cellphone.

44% of younger users between 18 to 29 have deleted the Facebook app from their phone.

42% said they had taken a break from checking the platform for a period of several weeks or more.

54% of users ages 18 and older said they had adjusted their privacy settings in the past 12 months.

47% of the users who have downloaded their personal data from Facebook have deleted the app from their cellphones.

If you are using Facebook or an ad campaign, you probably don’t need statistics to tell you that activity and interaction have fallen off considerably.

With over 2 billion users, Facebook offers the largest social media platform in the world. It is not going to disappear, as was the case with Myspace.

However, with some of the dramatic changes that Facebook has made to its newsfeed algorithms, there is less activity now for newspaper articles as well as business pages promoting products and services.

In other words, it is less likely that your piece of content about your books or blog articles will appear in users’ newsfeeds.

Buffer and BuzzSumo partnered to analyze more than 43 million posts from the top 20,000 brands on Facebook in one of the largest studies of current Facebook behavior.

Here are a few dramatic statistics. 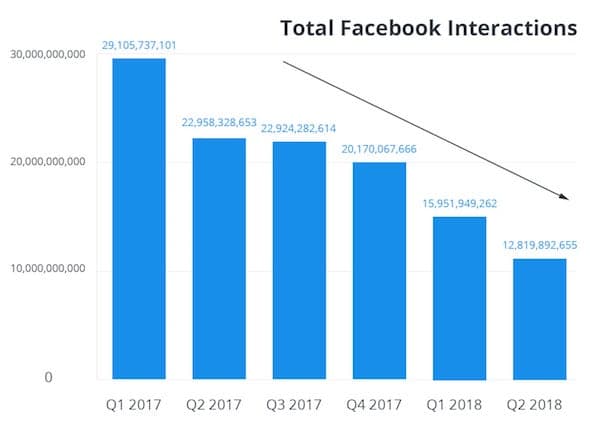 In a little over one year, interactions such as Likes, shares, and comments have dropped by well over 50%. 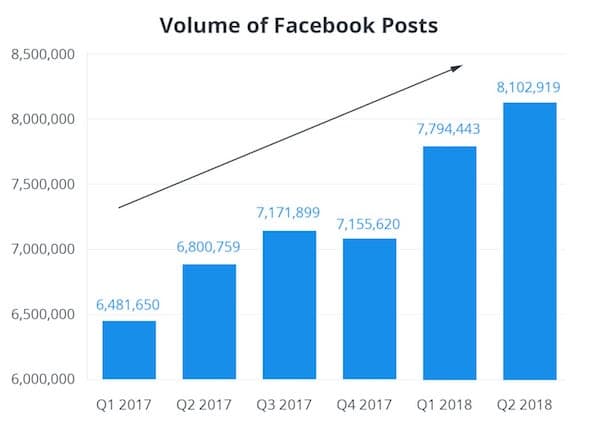 However, posts have increased by 25% over the same period. 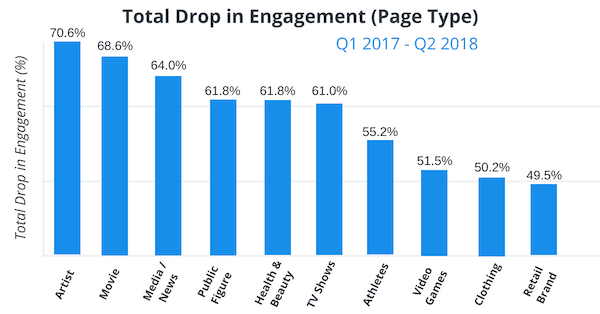 But the most discouraging statistic is that the fall in engagement has been most felt by artists and public figures.

I suppose we could say that Facebook marketing for books and authors fits into either of these two categories.

The last number worth noting is that there are more than 80 million Facebook pages, all competing for a target audience in the very limited space available in the News Feed.

What can you do to adapt?

Social networking is always changing. As an online marketer, you need to be flexible to find potential customers or book buyers.

While we use a few social accounts to promote Just Publishing Advice, organic search traffic from Google, Bing, and Yahoo delivers well over 85% of our site traffic.

We have never used, nor needed to use advertising on Facebook.

But Whizbuzz Books, which I have now sold, was heavily reliant on social media for book promotion.

When we noticed the first signs of a dropoff in Facebook activity, we were, by chance, in a very fortunate position.

Over the preceding 12 months, we had spread our social media activity across more platforms.

The impetus came from the knowledge that Stumbleupon was going to shut down. It was not a huge traffic driver, but enough to want to replace the traffic somehow.

But instead of simply adding one new platform as a replacement, we opted for a broader solution.

Over the space of a few months, we added and started to build organic followings on Tumblr, LinkedIn, Flipboard, Goodreads, and WordPress, as well as opening two new Twitter accounts.

Yes, we certainly noticed the fall in Facebook engagement. But it was only one part of our social marketing, and it was more than offset by the new traffic sources we had developed.

The lesson is simple. It’s never a good idea to put all your eggs in one basket.

It is especially true for online and social marketing and promotion.

Make sure you diversify and spread your promotion across numerous platforms.

Can you still leverage Facebook to promote your books and blogs?

Yes! Of course, you can. Facebook is still a good option for marketing books.

But you will need to change and adapt to the new realities for your Facebook advertising and promotion.

1. Expand your number of friends.

The algorithms now heavily favor the interaction between friends and family. But don’t try to promote your books.

Make friends with people who share a common interest, and it will help build your name recognition as an author or writer.

The types of content with the highest interaction on Facebook are food, pets, DIY, fashion and beauty, humor/funny, and tech. So think about posting what is popular to gain traction.

Yes, it’s a bit like going back to how you used Facebook years ago. But today, it is effective again. Maybe update your personal profile photo too.

2. Build your Page Likes and followers.

Because there is so much competition for space on the News Feed for organic reach, the only way to get more attention from the Facebook audience is to get more Page Likes.

The only way to achieve this is to use the ads manager to promote page Likes. It is not very expensive.

If you are using a Page and ads on Facebook, define your targets for your Facebook ads from your Facebook Insights data as narrowly as you can.

Fine-tune your Facebook marketing because your books will only appeal to a niche readership.

Think about using much more precise geographical, age, gender, and interest ranges. Perhaps target your Facebook Page like a local business to your region.

It is easy to add a shop (bookshop) to your Facebook page. If you don’t know how to do it, we wrote a step-by-step article on how to add a shop to a page.

There is no point at all now in using a scattergun approach on Facebook.

Check your page insights statistics and see when your friends and page followers are most active.

You could even prepare a basic Excel sheet to create a Facebook posting schedule.

In this way, you won’t waste a post on Facebook by sending it when no one is likely to react.

Not all the time, but if you get to know what your friends and page followers are keenly interested in, try writing for them.

It might seem counterproductive, but Facebook is definitely becoming more about personal interaction than business and selling.

Use it to develop your author or writer profile, and not so much about selling books.

You could try joining a few Facebook groups to extend your reach.

There is no doubt that marketing books on Facebook will be tough going for the foreseeable future.

Should you keep using it? Yes. But be ready to adapt to changes that will surely keep coming.

But you should also be actively building your social media networks that will help offset any loss of traction on Facebook.

Twitter is far less affected, and it is much easier to build a substantial following.

Perhaps think about growing your account or even creating new accounts to spread your word wider. Our experience is that books are still popular on Twitter, and they do gain interactions.

Other platforms to think about using are Pinterest, Flipboard, and Tumblr.

Individually they might gain only small followings, but cumulatively they can add up to a sizable traffic boost.

In the end, it’s about adapting to change because social media will always be changing.

3 thoughts on “Tips And Advice For Facebook Marketing For Books”